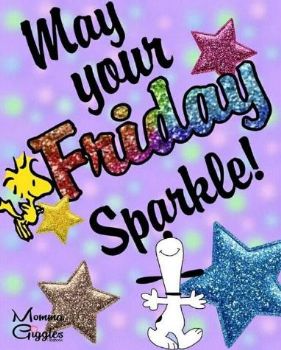 May Your Friday Sparkle!

As Friday comes to a close I hope your day did have SPARKLE!
When something sparkles it makes us smile, doesn't it?

Many of us have been able to spend some extra sparkly time with our families and/or close friends recently. I hope all those were good, sparkly times for you!

Usually, when family/friends gather after being apart for a time there are many discusssions of things in the past - often good things.

One such time for me came up in conversation today!

The general discussion was on toddler's biting others. I'm sure we all have stories to tell on that subject!
Many years ago, when I had triplet toddlers, I was alone caring for them one afternoon when they presented me with a challenge my older children never had. Biting is a rather common response from toddlers upset or frustrated about something they have no other way to express (yet). This particular afternoon, an odd sort of growling took my attention away from preparing snacks to "what in the world was going on now?" as I looked around the corner into the dining room! There I see my trio huddled closely, each one with their mouth firmly on another's arm!!! Each growling as if to be telling the other they did something wrong. Trying to separate them proved quite difficult! I could extricate one, but as I went to pull the other two apart, that one would find another appendage to bite down on! And soon all three were biting one another again, but a different triplet than before!

All my attempts to break up this growling & biting 'contest' were utter failures!

So I simply stayed there, sitting on the floor beside them, waiting them out...
...and waiting...
...and waiting...
...and wanting to move on, I began to quietly talk about what I was having for snack and how yummy it was and how much I really wanted to have it...
...but sadly I couldn't because everyone was too busy growling and biting for reasons I did not know.
By the time I'd repeated various versions of this a few times, they began to take notice...
...and listen...
...and stop growling...
...and loosen their bites,
and their fierce grips on one another...

After they nicely took their places at the table and were enjoying their snack, I quietly looked them over to assess the bite damage. While they each had some evidence of several bites, none were bleeding.

After snacktime was over the remainder of the afternoon went pretty well - no major issues at all. It's funny how they were sometimes: angry, fighting, jealous, mean, or any number of negative emotions could instantly turn to happy, playful, loving, kind, helpful (and so on) with no real indication what changed. But one thing was certain: whatever mood they had was contagious! As quick as one changed how they were feeling, the other two felt the same! For me, the times when they were so loving on each other were the best!

I took a photograph once, when they were just two years old, of one of their "triplet hugs" while looking down on their little blond heads ~ each had arms wrapped around the other two and their heads all touched in the middle!
With all the moves we've had since then, I hope I can find that photograph again one day! (wish I had digital pics back then) 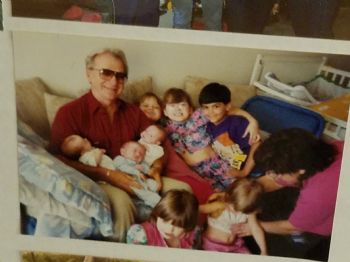 Not the best quality; this is a pic of a framed photo of my dad holding the triplets and surrounded by their 3 older siblings and some of their cousins. The triplets were not quite 2 months old, weighed about 7-8 pounds then & it was just a day or two from their original due date when this was taken.

May you always remember the good times!