Why is Thanksgiving so late this year?

An interesting deviation occurred in 1939. President Franklin Roosevelt moved it to the second to last Thursday of the month to allow more shopping time between Thanksgiving and Christmas to stimulate the economy. It gave birth to Black Friday shopping. Despite people being unhappy about it, he did not officially move it back to the fourth Thursday of the month until 1942 (signed into law November 26, 1941).
www.countrylivin
g.com/life/a25020918/what-
day-is-thanksgiving/

This link gives a lot more information about the controversy caused by the changing dates.
en.wikipedia.org
/wiki/Franksgiving

During this time, my mother asked her friend when her birthday was. The friend replied that she would have to check with the president to see what day it was going to be celebrated.

Whatever the day, hope you have a wonderful Thanksgiving with those most dear to your heart. Practice portion control and enjoy the once-a-year feast. 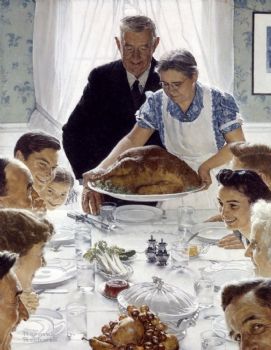