Lessons from the doggos... live in the moment 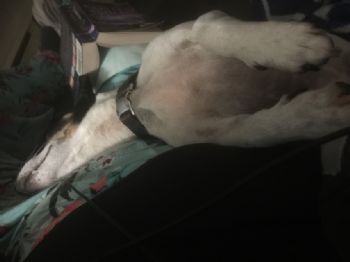 The Cooper-dog doesn’t worry about much, as far as I can tell. (I worry enough for both of us...). When he does something he tends to do it with all his being. Whether that is sleeping, walking, playing... or stubbornly refusing to go out in the rain. When he sleeps he does so determinedly, flopping down in one of his favorite spots with a big sigh, and going limp almost immediately. When we are out walking he will ignore anyone who tries to interrupt his mission. When he is playing he tunes out everything except the other dog, and the toy they are wrestling with at the time. And when he refuses to go out in the rain, he either pulls a quick u-turn at the door and starts back into the building, or plants his feet and pulls back as hard as he can (which is usually when I just pick him up and carry him out into the rain a ways, before I put him down next to a post or tree, where he will lift a leg... and then head directly and quickly back to the apartment building!). In each case his focus is sharply on what he is doing. It is difficult to get him on another track. Not impossible, of course (squirrel!), but rather takes concerted effort or extreme stimuli to change that focus. It seems that he lives in the here and now and doesn’t worry about what the next moment will bring. Even when he was attacked and bitten a few years after I adopted him... I was traumatized more than he was, and I refused to walk him down that street for months... yet I noticed he would turn that direction regularly after only a few days ( I wouldn’t let him go that way though, even long after his stitches came out). The only thing that makes him anxious is when I first leave him at dad’s house. (He shivers, until my niece takes him out of sight, and then he is fine). Even then he tends to be in the moment. My dog practices mindfulness so much better than I have ever been able to pull off. In general, I see this as a positive trait that I see in the Cooper-dog... and a lot of other doggos (though not all). He doesn’t hold onto anger, or nurse a grudge. He doesn’t fret (for long), or cling to neuroses. He just IS. He seems happy being what he is, where he is, doing what he is doing. And if something or someone takes him out of a moment then he adjusts to the new reality quickly and his focus turns to that new reality. Of course he is a pampered animal companion! And I have seen working dogs, herding sheep or other livestock, and those dogs have to think several steps ahead and know what is expected and how to achieve that goal. But those dogs are focused on doing those more complicated tasks with utmost attention and focus. I envy my dog his ability to not dwell on issues and problems. His absolute inability to catastrophize. His lack of malice or vengeance. His firm boundaries. His joy at being with his “pack” or person (that would be me... lucky me!). He very much lives in the moment whether it is uncomfortable or joyful. And he seems quite content in his reality. Wherever you are in the world I hope you have a marvelous day!!
Share This Post With Others
Report Inappropriate Blog
Member Comments About This Blog Post