Check Up All Clear!!

That was Henry's check up yesterday with his wonderfully skilled and compassionate surgeon. She is a rock star, no kidding. And Henry was greeted at the animal hospital by everyone who'd participated in his care there: they absolutely care.

After his surgery on his broken leg July 31 when he was 8 weeks old and the second surgery to remove the pins 8 weeks later, we've been hoping that his growth plates were NOT impaired. And that he does NOT have hip dysplasia either.

And now at 5 months the surgeon was able to say: both legs appear to be equal length and straight, not twisted. With hocks and knees in the same places. Not walking on "tip toe" on the broken leg. No evidence of hip "looseness".

He's cleared for walking up and down stairs -- a good thing in a three-storey house.

He's cleared for playing with other dogs too: for example, at obedience classes.

What a relief for us for sure (and worth the long long drive into Toronto through horrific traffic . . . ).

Here he was just before that crate accident (and no, I'll never EVER use a crate again for a pup . . . apparently these accidents are much more common than reported, and sometimes lethal . . . ) 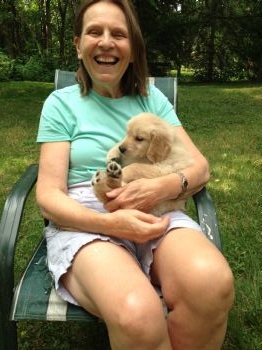 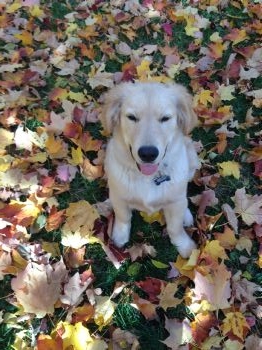 Following up on yesterday's blog . . . what great comments!! And no, I'm not a particularly "huggy person" myself for all kinds of reasons. I don't enjoy touch from strangers or acquaintances. But no question, Henry got lots and lots of hugs from the moment we met and every day since and especially yesterday and this morning. And yes, he glows with all that love and returns every bit of it to us with interest and wagging tail!!
Share This Post With Others
Report Inappropriate Blog
Member Comments About This Blog Post