Goodbye to a Precious Companion

I woke Sunday morning with intense dread, not wanting to get up and face what the day had in store. Our precious canine companion, our treasured sweetheart Joey, had died the evening before, after lingering for seven weeks after losing the use of his back legs. He had been an outside dog all his life, romping in the yard, running up and down the front steps, vigorously digging up bulbs, leaping around when told it was time to go for a walk, but one evening I came home from the supermarket and discovered him sitting on the floor of the garage, his back legs tangled in a weird arrangement. I lifted him up to a standing position to untangle his legs, but when I let go, he crumpled onto the the floor and was never able to get up again. He was a shelter dog, so we don't know his exact date of birth, but we know that he was already, or about to be, sixteen years old. In the past year, he has had several medical episodes but had been taken to the vet and nursed back to health every time, fully restored to his old tail-wagging self. My daughter Kana hoped against hope that he would make a comeback this last time as well, but it soon became clear that despite her tender care and numerous trips to the vet, Joey would never walk again. Fervent rehabilitation efforts turned into elderly care, which turned into palliative care, which ended this past Saturday night when, passing the place where we had made a bed for Joey in our front entrance hall, I noticed his breathing was different and he was making a guttural sound he had never made before. I called up to Kana because I thought this might be the end. Kana rushed downstairs, gathered Joey's emaciated body in her arms, and sat there on the floor holding him, and as he died, we kept saying, tears running down our faces, "Thank you, Joey. We love you, Joey. We love you, Joey. Thank you, Joey." He passed away peacefully, and then moments later my husband opened the front door, home from work to join us in our sorrow. We were all in disbelief, despite having known for a long time that this would happen. Death is always shocking.

So on Sunday morning we would have to take Joey for his funeral. After a fitful night, I woke up dreading the day, wondering how I would deal with not only my own grief but especially with Kana's. I knew that losing Joey was to her what losing Kana or either of my other two children would be to me. Never-ending, bottomless grief. How do you get through it?

And then I had a moment of clarity, like a message from God. Just live this day from moment to moment. Shield your heart from ordinary feelings you often let in but which are unrelated to this momentous day--fear, anger, resentment, insecurity, boredom, worry, pettiness, jealousy, scorn, embarrassment, regret. Clear your heart and respond to what comes. You have the strength. Be there for your daughter, and for your husband, who has also loved and is grieving the loss of Joey.

We took Joey out to a city-run facility that provides pet funeral services. The ceremony was beautiful and moving. It was just the three of us saying goodbye, as my two other adult children live rather far away in Tokyo. We lit incense, said prayers, and took photos of Joey surrounded by the flowers customarily placed around the deceased in Japan, and then the gentle, compassionate staff took Joey away to be cremated. Kana and I used up half a box of tissues wiping all our tears, but driving home, we felt cleansed and grateful that Joey would no longer have to stay here on Earth immobilized in a body that no longer worked. We imagined him leaping through the fields of heaven, chasing his squeaky little orange football, sitting and waiting for treats on demand (he was a very smart dog), and wiggling and writhing in ecstasy in the rough grass in our yard. We will miss him terribly, but we know he is at peace. He lived a good life and will be forever loved.

And the message I got on the morning of Joey's funeral--it carried me through that day and the few days since. I was there for Kana. We sat for hours at the dining room table, reminiscing about Joey, how lucky we had been to choose him out of the tornado of puppies we saw playing outside at the shelter that day sixteen years ago, how he immediately took to us and understood that our home was his territory, how he never showed anger or barked or complained (except for when he was being bathed or having his nails clipped). On the day of Joey's funeral, I was focused on only one thing, saying thank you to Joey and supporting my daughter. I made it through.

The suspense is gone, but the peaceful feeling remains, and I will take the message I got in that moment of great stress--waking up to say goodbye to a precious one--to live life as it comes and simply to find enough strength, discipline, and love to control my reactions. I've always been under the false impression that I have no control over life. I've always thought that life just happened TO me, not that I could shape it with my inner resources. Heck, I've rarely even been conscious of any inner resources, so I'm grateful for that instant of knowing Sunday morning that my inner resources are there and available for use.

Oh, and one more thing. This is very cliche, but I have to mention it because it touched me. Just outside our dining room glass doors is a tree I planted two years ago. When I bought the tiny plant, the instructions said it might take a couple of years to grow big enough to blossom. I was excited to see a few weeks ago that buds had appeared, and I watched them every day to see signs of imminent blooms. A few of the heavy buds fell off, and I wondered if I was caring for the plant properly, as I'm not good at this kind of thing. But on the morning after Joey died, when I came downstairs after my epiphany, I looked out and saw that there was a beautiful purple flower halfway up the little tree. When I showed it to Kana later, tears came to her eyes and her voice broke as she said, "That was Joey leaving us a message on his way up to Heaven." 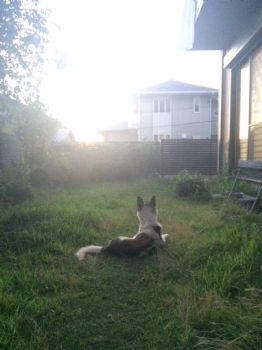 This is Joey, 2017, two years before his death, facing into the light.