Falling in Love... With My Sous Vide Circulator

I've been wanting one of these things for a few years now. I remember the first model that was "readily available" for the home market (having been used in restaurant kitchens for years). It was "only" $1200. Considering that that is my grocery budget for three and a half months, I had no choice but to merely fawn over it in the catalog much in the same way I used to... I mean "other kids" used to fawn over certain sections of the Sears catalog.

But this past Amazon Prime Day saw a model with excellent reviews for under $100 and I couldn't pass it up. Considering that my wife's first and only comment when I told her about it was " so is that the one you want?", I knew that I had been talking about them too long and it was time to get it.

If you're not familiar with what a sous vide circulator is, it's rather straightforward (and if you are familiar, feel free to skip to the next paragraph... or to the bottom of the post to collect your daily Spark Point for reading this). "Sous vide" is French for "under vacuum" and it's the process of cooking food that's been placed in a vacuum-sealed bag into a water bath and cooked. But what makes it so special is that the circulator is manufactured to be very precise in its temperature control (+/- 0.1 degrees). This allows you to cook foods for an extended period of time without the danger of overcooking.

And, as the name suggests, the circulator continually circulates the water as it maintains the set temperature so that there are no hot or cold spots. So you seal the food in the bag, place it in a container or pot full of water, let the circulator bring the water to temp, and then walk away.

As an added bonus, since the food is in a sealed bag, there is no loss of natural juices during the cooking process.

Last week, I did a London Broil roast. After coating all sides of the roast liberally with salt, pepper, and garlic powder, I sealed it in the bag, placed in my large stock pot (my preferred pot for doing sous vide), set the circulator to 137 degrees (F), and set the timer for 9 hours. 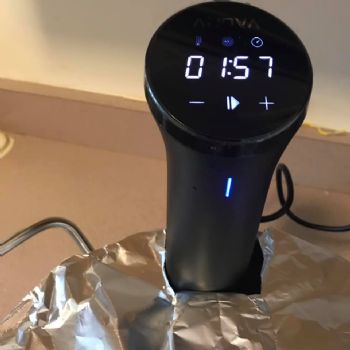 Yup, you read that right, I cooked that roast for 9 hours. But, because the water was kept at 137 degrees, the roast itself cannot go higher than 137 degrees. So after 9 hours, I had a roast that was beautifully pink all the way through. 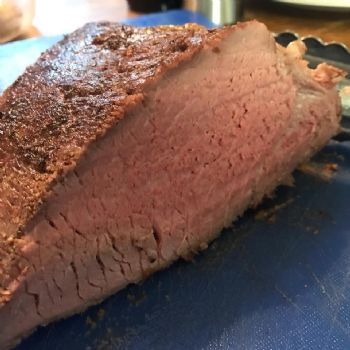 Once it was done cooking, I quickly seared all the edges in my cast iron skillet to get that gorgeous crust on it, and I had the perfect roast. And since there were some juices left in the bag, I just poured it into a pan and quickly reduced it for an au jus sauce for my wife and kids. It added flavor but wasn't necessary.

So why 9 hours? Truth be told, four hours would have been sufficient (the minimum, actually) but something wonderful happens during such a long, slow cook - the fat renders and spreads through the meat and the collagen is rendered into more of a gelatin and you're left with a cut of meat that is far more tender than you've ever experienced.

I've done steaks, roasts, eggs, chicken breasts (perfectly juicy chicken breasts are AMAZING)... and it's an incredibly healthy way of cooking. And it beats a more traditional crock pot because the food is sealed and there's no loss of moisture.

So for those of us looking to eat healthier, let me strongly recommend a sous vide circulator. Because the food is cooked in a sealed bag, you end up with flavorful and juicy foods - and that means you don't need calorie-dense sauces to go with them. A single 4-ounce serving of London Broil is 168 calories.
Share This Post With Others
Report Inappropriate Blog
Member Comments About This Blog Post