No, I don't normally blog about food... but a dear friend and fellow Sparkler wrote about her lovely spaghetti dinner, then added an apologetic comment about all the carbs. Not that I think a good spaghetti dinner is not worth the carbs, but I do have a way of getting that spaghetti fix without them... by substituting spiralized zucchini.

The trick is not to get a fancy spiralizer that you just know is going to be so complicated and time-consuming that you don't even take it out of the box. (I have one that supposedly attaches to my seldom-used Kitchenaid mixer -- I wouldn't know because it's still in its original wrapping in the box.)

The one I use -- a LOT -- is so easy, and has a little button to push to activate it, so there's no arm-grinding exercise. And it's cheap. There may be others similarly made, but mine is the Wolfgang Puck Spiralizer. The link below is to Amazon, but I saw online that it is even cheaper at Walmart.

When I gave my friend this link, she thought it looked like a possibility, but wondered why the reviews were so negative. I took a look at them and realized it was because of the learning curve, the same mistakes I had made when I first began using it: 1) Mushing... caused by trying to push a whole zucchini through it by sheer force. What I do now is cut a zucchini in half, cut each end to make a flat surface, place one end on the little gripper thingy, then gently guide the zucchini to stay in the opening, resting on the blade inside--no pushing, the blade is sharp and needs no help. 2) Some people complained about the 1-inch piece of zucchini that didn't get spiraled at the end. I just remove it, slice it and add to the pile in the pan.

Put some oil in your pan and a little butter for flavor, or add whatever sauce you like. Tonight I added just onions and chopped garlic, then decided to put a dollop or two of sour cream, then my shrimp. Don't overcook. The zucchini is thin and cooks fast. Add a salad and some wine--Ta da, dinner! 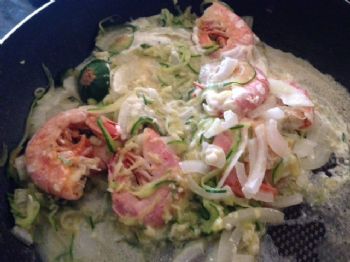 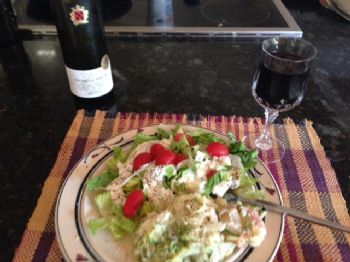