Take two! I typed up this long detailed blog and poof! my other iPad died and the blog was lost in cyber space.

Yesterday, I went for my first post op surgery appointment. Surprisingly enough, out of the 4 incisions, only one had surface stitches. All 4 incisions had stitches inside but 3 of them were closed with glue. The stitches that were removed had been in for 18 days so they were tough to remove and fairly painful. When the surgeon examined my hand/wrist he had me try to wiggle my fingers, bend my wrist one way, then the other and generally checked my movement. In short, it hurt like heck.

The doctor then explained what he repaired in my (right) hand/wrist. He removed torn cartilage in the top of my hand. On the left side of my hand/wrist, at the base of the thumb, he released a tendon and repaired the area. On the palm of my hand he released a compressed nerve - carpal tunnel repair. Finally, on the wrist bone on top of the wrist to alongside the outside of the wrist, he made a L shaped insion. There he removed damaged muscle tissue, cleaned out the joint, repaired a torn tendon and reconstructed a damaged ligament and the area around the tendon and ligament. He had said he did a lot and he wasn’t kidding. I asked his physician’s assistant if this damage could have caused crushing pain before my surgery. She said definitely- both before and after. The injured areas and the surgery sites were all near nerves. That explains the electrical shocks that filled my hand - sometimes for a few minutes, sometimes for hours. What I can’t get over is how I’ve been walking around for such a long time with so much damage!

After answering a bunch of questions and getting a cast removal/progress exam appointment, I was sent to the casting area. The tech there was very knowledgeable and explained everything she was doing as she was doing it. The cast has several layers. The patient is allowed to select a color for the outside layer. The tech and I shared a laugh when she pulled out a little device that had all of the cast colors from which I could choose. (It felt like I was selecting paint, flooring or fabric!) There were about 10 colors and I selected hot pink because it looks happy, bright and cheerful. I get my cast off on September 9th, two weeks later that we originally thought but then I had much more damage than we anticipated.

Here I am in all of my hot pink glory! 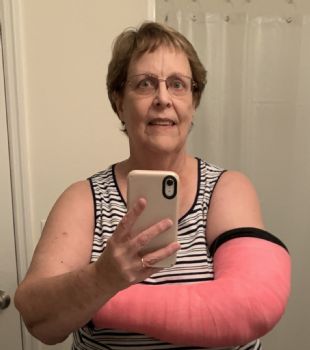