Just got back from a little excursion to some property Sabina bought. She requested my presence to pray protection over the place. She's already built a wee little house and cleared away rubbish and rubble. But she was advised strongly to close off the rest of the property to avoid invaders - squatters was our name for them. Because once they set up camp it{s hard to remove them. So we got a motokar which chugged valiantly up the steep incline. I ask you to join in prayer for provision for necessary materials, and meanwhile that God and His angles would defend. Her goal is to reach out to the neighborhood with the good news. Now,Sabina has another work established elsewhere in the "cerros" (higher ground) where she goes usually on Mondays, to teach, preach, and minister. I'm looking forward to introducing Pastor Edwin to this little dynamo!
I slept in till around 6:30 Peru time (7:30!) and had a nice breakfast of sandwiches made with shredded chicken, mayo, and lettuce, and instant coffee. Sabina then went to change my dollars to soles while I took a little nap. When I awoke I saw she had left me a bowl of fruit. 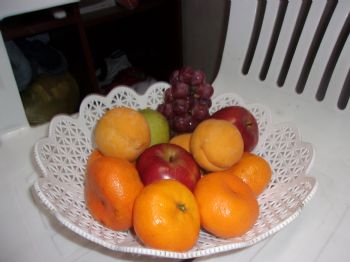 Afterwards,I treated her to a shopping trip at Tottus for things for the house - staples like rice, sugar, laundry soap, and toilet paper - as well as stuff to make PBJ's (I already brought the PB!) for youth service tonight. Nino the dog was very glad for our return. 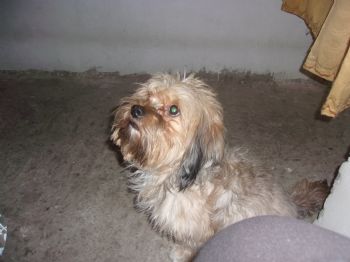 After that trip, we waited for a brother to come get me for a lunch invitation - his wife prepared fried cuy (guinea pig) rice, and fried potatoes. That's Bernardino (Dino) and his wife Nelly (who has baby on her back) 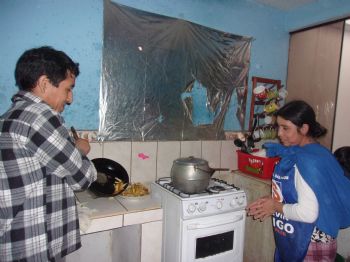 The cuy was crispy and delicious! 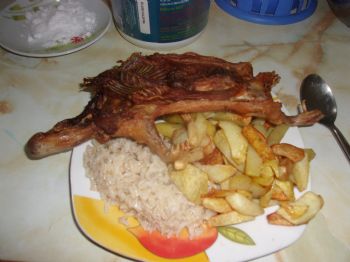 We had a nice conversation, as I heard how each came to know the Lord, and talked about the necessity of personal time with the Lord in His word and prayer. Well, I had WALKED with the brother to his abode, but the way back was uphill, so he got us a motokar. And I had gotten some walking with Sabi as we went towards the property, seeking a motokar. So...I've made up for being seated most of yesterday. Pictures will be forthcoming.
Oh, I also have to say a little something about the trip. It's not just about what I do when I'm here - it's the in-between times as well. At the airport inRochester I met a young teacher who was also in the district, also taking off day after last day, for COSTA RICA. As we started chatting she broke down in tears over how mean someof her coworkers are - I count myself so blessed to work with the people at (shout out to) School #4! Anyway, the MOM in me rose up and I moved over next to her and gave her hugs. She was comforted, and she and her mom (with whom she conversed via cell phone) believed God put me there for her for that time. So - Praise God, and thanks to all who are praying for me! Then at the airport in Charlotte, I was chatting with my wheelchair jockey, and learned she has traveled to various US cities and MINISTERED. Seeing she was a kindred spirit, I blessed her with a bigger than usual tip.
That's all for now!
Share This Post With Others
Report Inappropriate Blog
Member Comments About This Blog Post