A couple months ago I read a book at the recommendation of a presenter at a conference I attended in February. I found it to be a valuable resource in helping me cope with the challenges of my job as a community college dean, and with life in general. I had been wanting to blog about the book for a while, and just haven't had the time. I've got the day off today, and it's about time I did what I said I would do.

The book is called The Four Agreements: A Practical Guide to Personal Freedom by Don Miguel Ruiz.
www.amazon.com/Four-Agre
ements-Practical-Personal-
Freedom/dp/1878424319
The Kindle version is a bargain, and the paperback isn't that expensive either if you prefer to read your books on real paper.

Today's blog is about Agreement One: "Be Impeccable with your Word"

As much as I try to be impeccable ("without malice or sin"), there are times when I misstep. Gossip and unkind words pop into the conversation or I fall into buzzwords and shortcuts in my communication that are misinterpreted. While it's not my intention, I am trying to focus more on always being impeccable. The toughest time for me is when I'm angry or frustrated - those moments are when I'm most likely to lose control.

Ruiz shares this story that really resonated with me.

"There was a woman, for example, who was intelligent and had a very good heart. She had a daughter whom she adored and loved very much. One night she came home from a very bad day at work, tired, full of emotional tension, and with a terrible headache. She wanted peace and quiet, but her daughter was singing and jumping happily. The daughter was unaware of how her mother was feeling; she was in her own world, in her own dream. She felt so wonderful, and she was jumping and singing louder and louder, expressing her joy and her love. She was singing so loud that it made her mother's headache even worse, and at a certain moment, the mother lost control. Angrily she looked at her beautiful little girl and said, 'Shut up! You have an ugly voice. Can you just shut up!'

"The truth is that the mother's tolerance for any noise was nonexistent; it was not that the little girl's voice was ugly. But the daughter believed what her mother said, and in that moment she made an agreement with herself. After that she no longer sang, because she believed her voice was ugly and would bother anyone who heard it. She became shy at school, and if she was asked to sing, she refused. Even speaking to others became difficult for her. Everything changed in the little girl because of this new agreement: She believed she must repress her emotions in order to be accepted and loved.

"Whenever we hear an opinion and believe it, we make an agreement, and it becomes part of our belief system. This little girl grew up, and even though she had a beautiful voice, she never sang again. She developed a whole complex from one spell. This spell was cast upon her by the one who loved her the most: her own mother. Her mother didn't notice what she did with her word. She didn't notice that she used black magic and put a spell on her daughter. She didn't know the power of her word, and therefore she isn't to blame. She did what her own mother, father, and others had done to her in many ways. They misused the word."

The harm we do by misusing our words can cause lifelong damage. This is something I try to remember, and it is especially true on SP because we are all here because we want support and validation, not criticism or belittling. I promise to continue to improve on this first Agreement. 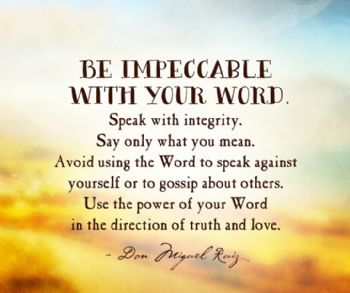 BE IMPECCABLE WITH YOUR WORD
Speak with integrity.
Say only what you mean.
Avoid using the Word to speak against yourself or to gossip about others.
Use the power of your Word in the direction of truth and love.
Share This Post With Others
Report Inappropriate Blog
Member Comments About This Blog Post