Transporting ‘goods’ for future sale in a different location has seen many improvements over time. From ships and the wheel to moon flights, Humans are creative.

When settlers first came to New England barrels were commonly used to move goods, along with tins and wooden boxes. As the country grew and southern plantations produced cotton, New England mills made fabric available. The invention of the sewing machine about 1850 made sturdy seams that would not give way to rough treatment when full. Soon textile sacks were replacing tin and wood for transport of many goods.

Kitchen staples such as sugar and flour filled some sacks; animal feed and planting seeds filled others. Soon farmer’s wives began opening the seams, washing the bags and turning them into bed linen, undergarments, and eventually dresses and shirts. You see this in the dresser cover and the girls’ dresses and boy’s shirts of this photo of unnamed family. 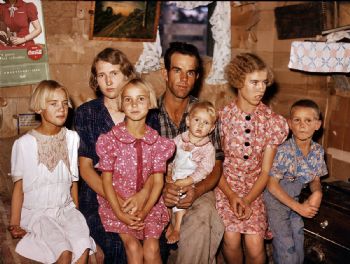 Manufacturing companies soon realized they could benefit from “Branding” by providing colorful patterns. Since several bags were needed for Mom to sew a dress, the farmer was instructed to buy the same pattern when he went for flour or sugar. Bemis Brothers Bag Company was one of the most well known.

Three of my father's sisters worked at Bemis Brother's company in Kansas City. Three plastic totes of feed sacks and feed sack fabric have come to me from these aunts.
Feed sacks are collector items now.
But instead of trying to sell them, I am making “Grocery Bag Holders” for family in the next generations. This is a practical item but shows off some of the fabrics used by Mothers and Grandmothers who “Made clothes for their children” from 1880 through about 1950. By this time manufacturers began using more paper bags and less of the textiles. 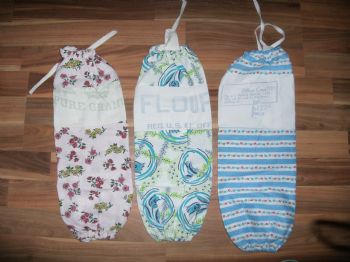