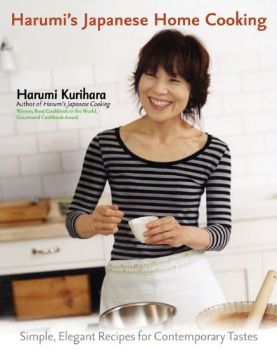 Last night I made another Japanese meal from Harumi's cookbook. However I had been out in town and by the time I actually got dinner on the table it was too late and we were too hungry to take photos.

I made Pork Tonkatsu, which doesn't count for the challenge as it's one of our favourite dishes (a Japanese Pork Schnitzel) and we have it frequently.

However, for the challenge I made two vegetable dishes from the book. The first was a daikon (radish) and carrot salad. Although I'm new to Japanese cutting it didn't take me as long as I thought to julienne everything. It sat in a bit of salt for a while to soften and I was really surprised at how much water I had to squeeze out of it before adding the green onions and dressing. I left out the garlic because I cannot handle raw garlic. It was delicious and we will be having it again for sure.

The second dish was sauteed bean sprouts and bok choy. It did take me forever to trim the bean sprouts the way the book explained, but I will get better and the sprouts definitely looked and tasted better, but I imagine they were slightly less nutritious. This dish was absolutely delicious. I love bean sprouts and my hubby loves bok choy. I doubled the garlic since it is a cooked dish and we had left the raw garlic out of the salad. The way it was cooked the flavours of the vegetables really shone and the seasoning of soy sauce and sesame oil was an enhancement rather than masking the freshness of the flavours. So definitely a winner. I just need to speed up trimming the bean sprouts. There must be a trick to it.

Once again I followed the recipes and both hubby and I were thinking that the portions were very, very small. However, we both feel that our portions are generally too large as was shown when we followed the "Stay Slim" diet from the 1950's book. We were both hungry before we went to bed, but had an organic orange each and we were both good. It may take us a while to get used to smaller portions.

So far we are loving this cookbook and lots more recipes to try.
Share This Post With Others
Report Inappropriate Blog
Member Comments About This Blog Post