I needed the whole picture!

I realized while on the exercise bike that I am really frustrated with my weight and health. Then I wondered how long have I been frustrated?

I was convinced there had to be a reason I was gaining and not losing regardless of what I did, ate or exercised.

Last year in January I started a new 28andMe eating plan based on genetics and I seem to remember liking it but then my world was turned upside down by family tragedies, caregiving and lots of travel. My anxiety and stress were at a level I never experienced before. I was spending quality time as a caregiver for people who historically had caused me great pain. I had little control over anything. I gained 15+ pounds and my health crashed.

I finally had a few scary events, I got a new doctor and she ran a ton of tests. Almost everything was normal -health issues I had for years were gone! But I was morbidly obese. She suggested diet pills and a reduced calorie diet. She was thrilled I used Sparkpeople and asked me to make a verbal contract with her. (Find these insulting and juvenile but I kept my mouth shut) I refused the diet pill and no to 30 grams carbs a day -been there, done that and I got sick. She asked me to think about it and I could see her disappointment. She suggested 30 minutes a day on the Exercycle, which is less than I normally do and before I could argue, I said Okay. (She didn't know me and I suspected, she would only see me as making excuses) She also didn't seem to factor in my 30% muscle mass as a factor.

So now at the end of my month, I have lost 10 pounds. I see her next week. I kept my carbs near 130 grams a day, allowed myself the occasional splurge of 1500 calories, otherwise mostly near 1200. I started with 30 minutes on the bike but have since added a 15 minute walk with dogs and since they are Siberian huskies, I consider it to also be resistance training. I started my stretching routine again this week and some free weights. I am feeling pretty good.

But I've done all this before without results -wtf? I was a scientist, I have a brain conditioned for problem solving, this was driving me to distraction.

Last weekend, I drew up a flow chart and put everything in it -the whole shebang! Life events, injuries, health, health events and I began to see definite correlations. A lot of Ah Ha! moments.

It looks like everything started going downhill as soon as peri-menopause started and got extremely bad towards the official 'menopause' time, which coincided with a few health issues that set me back. Four years ago, I was feeling cursed and went into weekly therapy to deal with stress and anxiety only to discover my PTSD was back! I spent 18 months working hard on acquiring tools and things were going well –until last January. Luckily, I also still had a lot of records of my weight and health kept in journals over the last forty years.

Looking at my flow chart, I see that my body's normal hormonal flux and stress were my sabotaging agents. I had made great strides towards getting healthy until I was derailed last year. Basically, I am just picking up where I left off a year ago.

Now, it makes sense and I really need it to make sense. Now, I can trust myself and say "no" to diet pills and extreme carb reduction. Also, understanding this will help me prevent any future traumas from derailing me.

It feels good to be in charge or me. Moving forward is looking exciting for a change!

I highly recommend a lifeline flowchart, if you feel confused by where you are or why you can't move forward. I am not saying my experiences with perimenopause are yours, I have ovarian cysts and fibroids that were impacted by the hormonal flux. But, maybe you can see a light at the end of the tunnel and that might be just what you need. 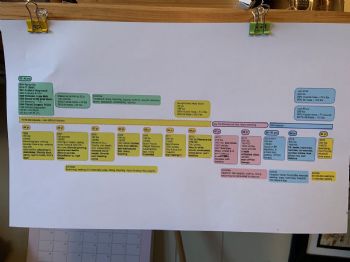