I entered 2019 on a high note. I'd reached a weight that I hadn't seen in ages, and the scale was trending downwards. Then I began getting hives and a nasty facial rash every night. While the reason they appeared isn't clearcut or known, it's probably to do with the cocktail of medications I was on. Brief backstory:

A year ago, I lost my sense of smell. It came back in June, but distorted and in a limited capacity. My doctor has tried several things: medication changes, MRI of the brain, endoscopy, and recently a month-long course of antibiotics for a possible entrenched sinus infection. Nothing has worked, the specialist is stumped, and in the meantime I've spent the last month on an antibiotic that I'm mildly allergic to, an anti-fungal, several kinds of probiotics, several other supplements from my OB/Gyn for PCOS, and my normal medications, including a new sleep med. (13 meds total) Something in this cocktail (or the gigantic number in the cocktail!) did Bad Things to my system. I'm now on no medications at all, not even vitamins, trying to clear out the hives before I end up on a steroid course to treat them.

Inflammation is a bad thing. There are numerous links between inflammation and obesity, weight gain, and metabolic syndrome. Long story short, my body got all inflamed and itchy, and my scale stopped dropping. Since early January, I pretty much stayed at the same general weight for three weeks. Then, about a week after I stopped taking all the medications, I suddenly started dropping again. I'm still getting the hives/rash every night, but perhaps my body is slowly countering the inflammation. Maybe it just needed to get off all those medications and flush them from my body. Either way, I've dropped a single pound since January began, and I'm grateful to have dropped it. Hopefully I'll make a bit more progress before February begins. I don't think I'll meet my first mini-goal by my birthday on March 1st, but considering the circumstances, getting closer at all sounds great.

But hey, that one-pound loss puts me down ten pounds from my highest regain weight. So there's that. Yay! It's only 10 lbs in four months, but slow is better than nothing at all, right? 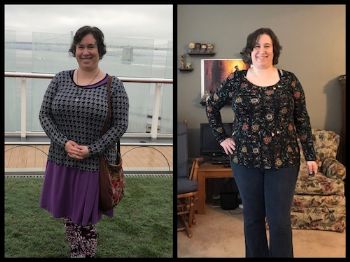 [I know it's hard to see much difference when I don't have an official "before" photo, but the shirt in that second photo didn't fit when the first picture was taken, so that's a good enough measure for me!]
Share This Post With Others
Report Inappropriate Blog
Member Comments About This Blog Post