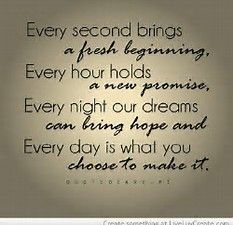 "Every second brings a fresh beginning. Every hour holds a new promise. Every night our dreams can bring hope and every day is what you choose to make it." 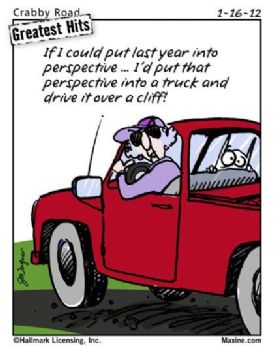 "If I could put last year into perspective..I'd put that perspective into a truck and drive it over a cliff."

A rancher was minding his own business when an FBI agent came up up to him and said, “We got a tip that you may be growing illegal drugs on the premises. Do you mind if I take a look around?”

The old rancher replied, “That’s fine, you shouldn’t go over there though.” As he pointed at one of his fields.

The FBI agent snapped at him, “I’m am a federal agent! I can go wherever I want!” With that he pulled out his badge and shoved it into the ranchers face.

The rancher shrugged this off and continued with his daily chores. About 15 minutes later he heard a loud scream from the field he had pointed out earlier. All of a sudden he could see the FBI agent sprinting towards him with a large bull on his heels.

The rancher rushed to the fence and yelled, “Your badge! Show your badge to the bull!”

It's Look for Circles Day! Really look at your surroundings and find the circles in your everyday items. Kind of mind-boggling what you see when you really open your mind and eyes! It's All Soul's Day (commemorates the souls of the dead; in some countries, today is the 3rd day of Soul's celebration cycle that started with Halloween), Cookie Monster Day (celebrates that cute blue monster of 'Sesame Street'; Cookie debuted on 'Sesame Street' in 1969 but his creator, Jim Henson, had used him in earlier commercials such as Arnold for Frito-Lay's Munchos), Devilled Egg Day (a fun way to fix eggs and easy to eat), Plan Your Epitaph Day (do you really want to leave it to your brother-in-law what is put on your headstone?), Jersey Friday Day (encourages all football fans to wear the jerseys of their favorite team), Practice Being Psychic Day (how do you know that you're not psychic, you may just need practice; here's your chance), Medical Science Liaison Awareness and Appreciation Day (a medical science liaison professional works with the sales people of pharmaceuticals, biotechnologies, and medical device companies to consult on how to reach and educate the public), Day to End Impunity for Crimes Against Journalists (originally in remembrance of two journalists murdered in Mali; brings awareness to the low conviction rate against those who harm journalists and media people; over 1000 journalists were murdered 2006-2017 just for reporting the facts), Love Your Lawyer Day (OK, for one day, no lawyer bashing or lawyer jokes; today is to recognize the good lawyers can provide), Fountain Pen Day (a day of nostalgia for those elegant tools of penmanship; granted they were messy but we'll ignore that for today), and Dynamic Harmlessness Day (dedicated to Jay Dinshah, the founder of the American Vegan Society; dynamic harmlessness promotes change through non-violence).