All of that due to one drug...

Well, they finally figured out what was the culprit to all of my physical health problems, and even some emotional and mental. It turns out that I had developed what is called akathisia.

Akathisia is a state of agitation, distress, and restlessness that is an occasional side-effect of antipsychotic and antidepressant drugs. 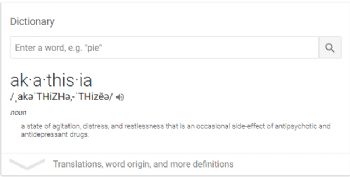 The final straw came one night earlier in the week, while lying in bed, thrashing about in severe pain. I finally started to put 2 + 2 together. I had been there before back in 2016 when two other drugs had put me in that very same situation. I don't know why I didn't recognize the symptoms again this time, maybe it was because I had not begun the thrashing like had that night, but the other symptoms were there.

The next morning, I called my doctor and told them that I planned to stop taking the offending drug: Prozac. The only reason I knew it was the offending drug was due to it having that as a possible side effect. And sure enough, the next night was a much calmer and restful night.

So, when the doctor called me the next day, I was able to give her the better prognosis, and I was switched back to Abilify, another drug I had successfully taken in the past. The only issue with it was that I had issues with vivid dreams, and with me having PTSD, vivid dreams are not always pleasant.

But with this, my body is pain free and healthier, so I'm ready to start exercising again. I'm breathing freely, and not having issues anymore. So, I'm planning to get back at it again this weekend.