It's been over a year now since I lost my soul-sister. I still do not understand how it has been a whole year. It still hurts, it stills sucks, and I miss her more than ever. Her daughter, the one she was so excited to be having after 2 boys and a miscarriage, is still fighting every day to improve. Though sadly she went into the hospital just a day or so after turning 1. They were not sure what was happening with her last update I heard. It all just sucks.

I am * still * at Papa John's and closing in on my 1 Year mark faster than I would have thought. I am * still * searching for a place to work to get back to doing massage. I miss doing that more than I ever thought possible.

On the positive side of things, something good came out of a bad situation for a co-worker. He is going through the beginnings of a divorce. He moved out of his home and back in with his Mom. In doing so he could only bring one dog with him so he took the one he'd had for a couple of years. The pup they had gotten only a few months before the divorce stuff started had to stay at the house with the soon-to-be ex and the kid. The soon-to-be ex suddenly decided she did not want this puppy anymore. Either he needed to find it a new home or she was going to pay the cheap cost to just have him put down. Puppy wasn't even a year old yet! Co-worker came in one shift just upset and shook up and was asking literally every one of us if anyone wanted a dog or knew of someone looking.

We ended up adopting the pup. He was 11 months old when we got him August 13th. He turned a year old on Sept. 1st, same birth day as my oldest kid. We renamed him Lucky. He is a Chihuahua/Lab mix and he's cute as can be! I weighed him yesterday when I did my own weight. He's a whole 18 pounds LOL This is Lucky: 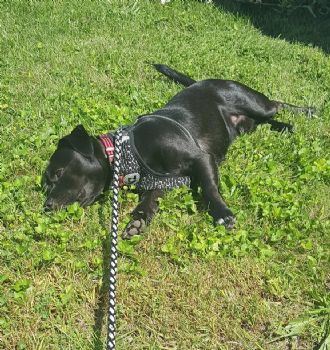 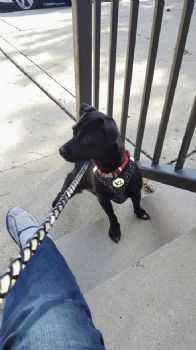 It has helped having a puppy! Lots of walking to help him burn off energy as well as for him to go to the bathroom LOL. I haven't had a dog in nearly 17 years and it feels so good to have one again!! It's the first time my boys have had a dog of their own and that's been fun to watch. There have been many adjustments because Lucky developed some not-so-good habits in the home we got him from, but we're slowly getting better each day.


Case in point about being a good things: Last time I took any measurements for myself was way back in December 2017. Here those are:


I just finally did my measurements again yesterday. I've been doing better than I realized! Check it out:

Not as stellar as it could all have been, but I'm pleased with it all things considered. Here's to being even better over the next 2 months!!
Share This Post With Others
Report Inappropriate Blog
Member Comments About This Blog Post