I've been Spark MIA since early last fall. I feel good connecting again. So much has happened. Late October I had my first of 2 total knee replacement. Rehab was going great. Got paroled from home therapy and cleared to drive beginning of December. It all went south on December 9th. Woke early in morning with sever stomach pains. DH rushed me to hospital. 3 days later I woke up in CCU. I had a blocked perforated intestine. Repair surgery 1st day and then flush surgeries next 2 days. It was scary to find out after that it was so bad, I was lucky I went when I did. Went home 12 days after I was admitted with a colostomy bag (that's how bad it was). 3 months later I had my successful reversal surgery and have been working real hard on healing and getting medical clearance to be me again. I had 5 surgeries and multiple procedures in 5 months. But my knee is doing great, I am completely healed and cleared to be as physical as I always was. My 2nd knee replacement will hopefully be right after Christmas. Im back at the gym, hiking local trails and moving forward.

And between my emergency surgeries and reversal surgery, I got a female Australian Shepherd puppy. Hubby's idea. He was so worried and scared during it all, that when I was able to talk and understand, he told me that I should get a puppy if I want. He regrets it now (lol) but Im thrilled with her.A lot of work but she keeps me busy and active. She and I, by next fall (after my 2nd knee is healed) will be back hiking the bigger mountains of NH together. 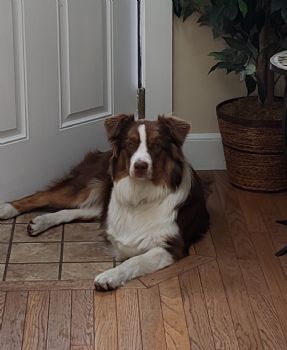