My holiday at the lighthouse is now finished and I’ve been back two weeks… but the effect of it hasn’t worn off yet and I can still think myself back there with crystal clarity.

We don’t actually stay in the lighthouse itself - everything would be round and there’d be a big light in the roof, which really wouldn’t do. No, we stay in the smaller of the two lighthouse keepers cottages.

This was our fourth stay there and I love it more and more each time we visit. I love the high vista over the sea, the clean air, being away from 100,000 mobile phone signals, the way its so quiet you can hear your ears working… and the weather… there is so much weather and you can see it coming from a long way. At night the lovely beams of light lull you to sleep - I try valiantly to stay awake to watch them but one… two… three… I’m gone. 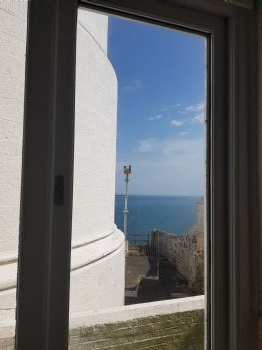 This is the view from the kitchen window...
The lighthouse itself is at the end of a narrow spit of land about three quarters of a mile long and is surrounded on three sides by sea. And there is nothing else there… a lighthouse, two cottages and… nothing.

We were there for just over a week. The weather - which was scorching hot in London all the time we were away - was a bit changeable at first - we were on the edge of an Atlantic weather system and it brought a storm one day that came in a horizontal deluge on one side of the house, leaving the other side completely dry. The following day was foggy and we had the fog-horn going from the early hours until… well, I don’t know how long it lasted because we went out, leaving the blotted-out lighthouse behind us.

Then for the last five days we were there the weather settled into dry and sunny with light winds and a daily high of around 23C - which I found perfect. We settled into a pattern of going to the beach in the morning, leaving when the sun got high and driving to the nearest big town for lunch and provisions then going back to spend the late afternoon and evening on the beach again, getting back at about 9.00. I’d swim - a lot - and read and knit… but mostly swim… and people-watch - not that there were many people to watch as its a fairly secluded beach that not many people find.

The last evening there we were on the beach as usual - I’d been swimming for hours and had actually got a bit cold - I monitor my temperature and ask myself - am I cold? - regularly when I swim in a cool sea, because I know about hypothermia…. but I was enjoying it too much and didn’t want to get out. So when I did get out I was cold all the way through.

Paul was in a wetsuit stood in the sea fishing and was as happy as it is possible for him to be.

I wanted to go home - it was about 6.30 and we had to leave by 8.00 - the carpark officially closes at 8.00 and we’d been told off the previous evening for staying too long, so we didn’t want to push our luck. I didn’t really want to pull Paul out of the sea - and he probably wouldn’t have come anyway - but I didn’t want to sit there trying to get warm.

The South-West Coast Path runs right past the lighthouse - its a path that runs right along the south west coast of England (you’d guess that from the name) and has been there for hundreds of years. In total its 630 miles long, is well signposted and is very popular with walkers of all ages and abilities.

From the beach a South West Coast Path sign said Start Point - where we were staying - was one and three quarter miles away… its about five miles by car, because of the way the roads work. I’d wanted to walk some of the path every time we’d visited, but as Paul isn’t a walker it hadn’t happened… this was my chance to do it.

I told him I’d be going… put shorts and shirt over my swimming costume… and set off. I thought - one and three quarter miles - I’ll do that in about 45 minutes.

I was wearing flip-flops - probably not the wisest footwear… but I had my back pack, a bottle of water and a sense of adventure so off I set.

The path rose steadily at first then levelled out with bushes on either side and stunning views over the sea - I could see Paul still fishing in the bay below. As I walked along flights of red butterflies took off from the bushes soon either side. I’ve never witnessed anything like that before and it was breathtaking. I sort of wished I had someone to share it with and was sort of glad it was mine to witness alone. 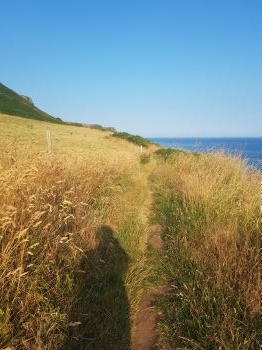 The path ahead of me..

I walked and kept looking back to see Paul getting smaller and smaller until he was just a dot… then I rounded a headland and couldn’t see him any more. 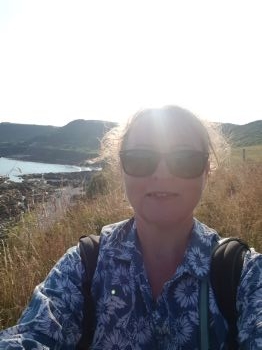 Most of the path climbed - some of it slowly, other bits quite steeply. I got out of breath at one point and had to pause.

It was lovely. Lovely. The sun was going down, casting long shadows, the light was golden, the air was clear, a breeze blowing and I felt really well. I was very aware of inhabiting my body.

Some of the path was flat and easy - other parts were steep and uneven. Some bits I had to step carefully over rocks and up and down and look for footholds. It did occur to me that I might fall and break an ankle…

I kept thinking someone was walking up behind me - but I’d turn and there’d be no one there. It happened a few times and it was starting to creep me out a bit. Then I realised it was a loose strap from my back pack hitting against the side.

I felt incredibly lucky to be there.

Every time I did a difficult bit - a stream I had to hop over or a difficult combination of rocks - I’d be rewarded with something lovely - a beautiful dragonfly would hover into view and stay for just long enough to really look at it - or a bird would suddenly start singing.

I came to a beach - down, below me - wide and golden and almost deserted - no road access, you could only get there on foot. I wanted to go down to it but I didn’t want the walk back up - and knew if I did go down I’d want to go into the sea and I’d get cold all over again. So I resisted - resolved to go to it next time I’m there.

As I walked around the edge of the cliff around the beach I saw the only other people on the entire trip - sat away from me on a bench. And I also saw a sign saying it was still three quarters of a mile to go. That was a bit demoralising as I thought I’d be nearly there by now.

Carried on past the beach and around the headland. There were some down-hill bits here - they were more difficult than the uphill bits. Out of the sun now as it dropped in the sky - a little cooler.

Then around the corner and there was the lighthouse in the distance.

Some of the terrain got very difficult - there were awkward combinations of steps to make and strangely shaped rocks to navigate. At some points the path got very narrow and there was just a rock face on one side and a what felt like a sheer drop into the sea on the other.

I could see the use of those Nordic walking poles - and the advantage of proper shoes - doing this in flip-flops was not my wisest move.

Passed a rock out at sea where seals lay in the sun, calling.

There were sheep all along the path and it seemed I had one particular ewe and (fairly large) lamb walking along with me. I guess it could have been different ones on different bits of the journey, but they seemed to be following me - like sheep, really.

At one point a sheep went sproinging across my path, down the hill - it made me feel quite giddy and I almost toppled over.

I carried on and carried on - the lighthouse still in the distance not seemingly getting any bigger.

I was quite warm by now, despite the fact I’d started off very cold, was in shadow and there was a breeze blowing. I reflected that I wouldn’t have been able to do this walk a year ago - I couldn’t have managed it - and six months ago I was just out of hospital and could barely move, let alone hike along the coastal path in flip flops. It made me appreciate how far I’ve come.

It was strange seeing the lighthouse from this angle - don’t usually see it from here - and could see the roof of our cottage.

Eventually got to the part where the path leaves the coast and crossed the spit of land - I’d seen it many, many times from the other side. I thought it was going to be much higher and much wider - no, it was just up a short slope and down the other side, really showing how narrow the land is there.

The sun was shining on the other side and I came back down onto the road that leads to the lighthouse. Walked back along the road, almost euphoric to be back on tarmac again. The views amazing - sounds ridiculous, but we always drive and it looks different through a car window. Down the hill until I got there and was impossibly pleased to be home.

It was well after 8.00 when I got back so it had taken me over an hour and a half - so much for 45 minutes. I was hot and sweaty, grubby, my feet rubbed raw in places… but I’d done it. And I was so glad that I had.

Thinking back to it is lovely - but its no substitute for being there - so I'm trying to plan another trip before there before the summer ends...