How did this happen?

How on God's green earth did I let all of that weight (plus 3!) come back on? I need to explore this because this is part of the introspection that I'm hoping takes me back on this journey to thin.

A little over a year after goal I went on a cruise. Leading up to the cruise I was doing Keto, just to shed those 6 or 7 pounds that had crept on since goal. I was very determined and ate nothing but egg whites and chicken for 2 weeks. Ironically, I didn't lose those 6 or 7 pounds. Then I got on a big boat.

On vacation, I had a no holds barred attitude. Breakfast buffet was the equivalent of 3 breakfasts each morning. Start with the eggs and fruit. Go back up for a cream cheese bagel. Then discover the biscuits and sausage gravy.

The nights were filled with cocktails.

When I got off that ship, I weight 10 pounds more than when I got on. So there I was feeling fat at 16 or 17 pounds higher than goal.

It had begun. I knew it would happen. I didn't think I could stop it. The weight was coming back. My lifestyle change had lasted about a year and a half from goal. I felt defeated. I felt like a failure. And that was after only 16 or 17 pounds.

I have felt a bit out of control since then. I'd step on the scale once in a while just to see. Sometimes, I'd think "wow, that could be so much worse" and sometimes I would think "this is the worst." I tried to diet here and there, but there was no mojo. No zone. I didn't have the will to even try very hard. And with every new size of clothing, I felt more and more like a failure.

You'd think after a size or two, or a defeated stop on the scale or two, I'd get my act together. You'd think the motivation of knowing I had succeeded before would do the trick. It didn't.

When I was thin, I gave a seminar at my workplace on healthy, low ketogenic eating and how it got me thin. I wore my skinniest red dress and felt like a million...and I felt like an authority. I was living proof. One of my attendees asked me what made me think I was going to keep the weight off. My answer: "I love this red dress more than I love half a large pizza."

Apparently I loved the pizza more.

I tried periodically to accept my fat and love myself. And I did...sometimes. But more often than not, I felt like a failure. And I felt helpless.

Part of me used the excuse that I couldn't diet when my dad was going through chemo. I mean, how could I possibly care about something as so trivial as a burrito when my dad was dying? Just an excuse.

Part of me felt like the only way I could lose the weight again was with the same super-expensive diet plan I had used the first time. And since I could no longer afford it, I had no hope. Just an excuse.

And while I made those excuses, the weight kept creeping up.

When I was at goal, I couldn't picture a world where I would regain the weight. How could I undo the hard work that I had done?

So how did this happen? I'm still shaking my head. The easy answer is that I love to eat and I'm not a big fan of exercising...and I latch on to any excuse that will allow me to keep eating and keep sitting. That's a heck of a lifestyle that I need to change.

So here I am today. 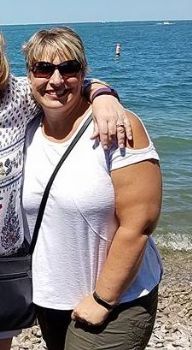 One step at a time.