I had come across a shadow box at a garage sale awhile back, that I picked up even though I really didn't have a specific project for it at the time. After laying around for awhile inspiration finally struck home. I was sorting through my sewing/ beading area trying to organize a little and it finally dawned on me that I had a lot of old timey and vintage sewing notions that would be fun to put together. Shortly before I dove into that I attended an antiques and collectible show and so I went on the hunt for little beauties for my shadow box.

I was finding all kinds of cool things. After awhile I was starting to realize I was entering the area of overkill. Nevertheless, I bought what spoke to me. When I got home I went to work and pulling out all the items I already had. Some were from my mom, others were from garage sales, estate sales, and the like, that I had previously accumulated. I pooled them altogether and indeed had plenty to choose from. That merely made all the more fun to play with and decide which items would make the cut.

Here's a photo of what I came up with. 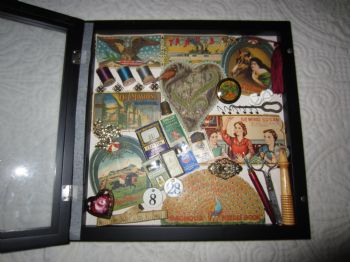 Here's a couple of photos of my dogs, 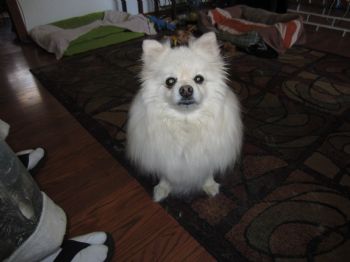 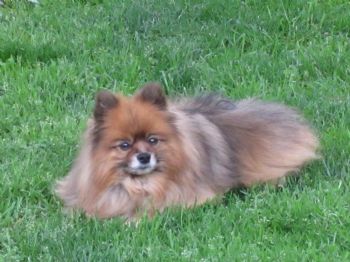 Here's a photo of a housewarming gift I made for a friend. I enlarged a design from the internet and cut out a stencil from paper of it. Then enlarged a font off my computer and cut out a stencil of that too. The bars around the edges were straight line stencils I made with a ruler and then I put them all together on a 10x10 canvas I painted with some really old black acrylic paint ( I was amazed it still worked) and then stenciled with some shiny gold craft paint. Then I stapled a length of nice black cording I had laying around to the back. I liked how it turned out so much that I went and bought another canvas to later make one for myself. Honestly though I don't know that my stencil will work as it was only made of paper and its all warped and curled now. We'll see, if I want it bad enough I could always start from scratch again. 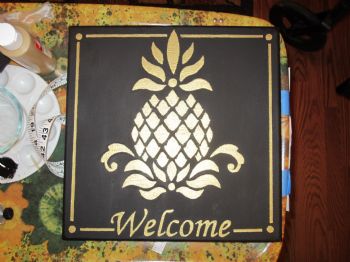 Here's a photo of a crazy quilt block I was starting along with my sister. She powered through making several already and I of course did my usual burn out and am only working on the second one, which has come to a complete stop for now. Eventually I will make four of them and in colors that represent the four seasons. This one will be summer (or possibly spring), the second one is fall and in oranges and browns and will be fall. Don't worry I'll get back to it eventually. 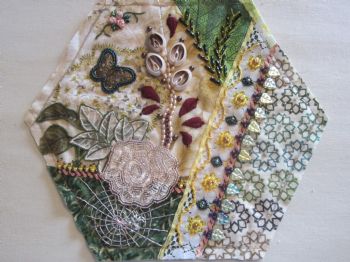 I blogged before about the health tracking calendar that I made and am happy to report that I still faithfully use it and my journal to log how well I cope with my food allergies. It's a good reminder and shows me right away when I start to stray off the path before 'gulp' 5 lbs somehow slides onto my torso without my knowing it.

This is the last month I took a photo of but I promise I use it every day. 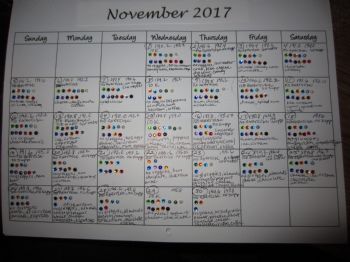 I still have a long ways to go on losing weight. I'm trending in the low 190's which means that I gained 10 pounds off the sixty that I lost. Which is frustrating but explainable. I started taking to the bad habit of cheating on a food I'm not allowed to eat (rarely) or more likely I've delved into some God awful sugar concoction that I justify to my self as a reward for eating carefully otherwise. A total cop out I know, but I think I needed a break from going for it and what that all entails for me. I think I'm gathering the momentum for another big push though. For the most part I follow my diet restrictions by about 90-95% of the time. I've been faithfully doing a 10K walk every Wednesday with my walking group, and as I was telling a friend today I need to take advantage of the summer weather. It's always easier to lose weight in the summer due to the foods you are likely to eat seasonally.

So my plan is to hone in on cutting the "treats" I think I need to have (oh poor,poor me

LOL) I think sugar is such a villian, so sneaky, so insidious, and such a traitor. (no , you're not my friend, I don't need you as a reward.

) I'm also doing pretty good on alcohol consumption. I don't drink unless I'm at a social gathering which is pretty rare and depends on what the occasion is. This has always had a serious impact on my diet in the past and I don't take it lightly any more. It ruins any progress for at least 2 days afterwards so it's so not worth it.

because that's when I make progress.

I'm also still debating dairy consumption which for me is mainly cheese or ice cream. I'm not technically allergic to it but it still messes with me, so I' going to whittle that back as well.

Anyhow I hope you liked seeing some of the projects I've been doing and here's a high five for forward momentum.