Just the way to start off my week got thru work ok and when straight to the gym without taking my self out of it and going home and either eating good or splurging again.

Well yall know the story here with this rude instructor always coming up to me and confronting me in front of the class during class well guess what happened a second time yupe u got it confrontation from rude butt vs Italian angry chick!!!! well the last time it happened was July 25 2017 believe it or not almost a full year!!! Anyways i know spin is the way for me to burn up alot of calories vs the other classes i used to go to before spin. SO i thought of different ways to resolve this issue and came up w this one - wear bluetooth headsets in his class to block him out out of his stupid rude hurtful comments he says thats like bullish rude etc. soo i got a good pair of Jam bluetooth earbuds 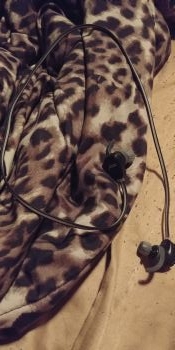 which costed me about $40ish

So i got up the courage to go to his class again and of course im in the waaaaaayyyyy back so i DON"T MOTIVATE ANYONE to do what im doing lord forbid it actually happened which it didn't anyways so i walk in and hes not in there so im ok for the second then i when to my bike set it up got on it and started spinning and then here he comes walking in i look at him for a second and then glance away that happens a few times then he walks out to go get something and im just keeping his tab of here he is in the room then then suddenly as he was walking out we made eye contact for a second sigh i knew that he might confront me infront of the class and act like a damn ass jerk!
Right when he started class he said this :
this is a class everyone does the same thing If u cant do that then leave/ do ur own thing then leave and use the bikes out there on ur own time.

So class started and he didn't do it so i was just somewhat getting off my edge mode but not for long after awhile here he comes he comes to the back row and confronts another lady then starts walking my way then stops at my bike then asks if i have everything off on the bike i said yes but then he turned it off while i was clipped into the bike anyways hes like this is a class we do everything together and i just told the lady down there the same thing. I said I have asthma because im fat 2. i had 4 knee surgeries and cant do what yall do sit down for a long time stand up etc then im like why are u always confronting me infront of the class?? Hes like im not i said u do u confront other ppl infront of the class . Hes like why cant u workout on the bikes out there ( outside of the studio) and i reply leave my butt alone.

He just left and walked back up to his bike and continued w class as if nothing was wrong i held my emotions within so that he wouldn't see that it effected me greatly but after i finished one hour on the bike i wiped down the bike like usual and left and once that door closed behind me i let my emotions out trying to get to the locker room before that really did happen and some lady in studio 2 saw me w a concerned look on her face. i got to my locker crying but not loud and crazy more of soft and medium or low . Once i got to my locker i just bend down but my head against the locker and just cried soft and low and a girl talked to me and checked if i was ok we talked for awhile and she suggested a few things i told her how i lost 70lbs and before she left me told me that i inspired her!!!! WOW what do yall think about that! then i thanked her for checking on me and talking with me so i went into the sauna and the second wave of it came on me and then the lady in there she was about in her 50s we talked and she suggested i email management which im leading more towards then anything because there could be others out there that hes doing this to. That have conditions that doesn't allow full access to do whatever u know. He was acting like a stuck up high school teacher or something. Like if u cant or not going to do this or that then theres the door!!!!


So after awhile i got myself calmed down and figured out a plan to put to place but i wanted to talk to my boo boo about it and i text him and then he txt me back the next second and told me he was just heading home then i didn't expect this but he called me and so i told him and to my surprisement he told me that i needed to let management know about it so i think im going to find the email address tomorrow and email them.

SO i got home and washed my hair and all and im still very shocken up about the whole thing not to mention i had an aneixty attack and all . and now im sooo hungry but when i think of food i feel like throwing up so i dont think im gonna eat dinner but just go to bed i know its bad but omgies
Share This Post With Others
Report Inappropriate Blog
Member Comments About This Blog Post