Revealing the Rest of the Mystery

Yes, all of you who chose to read Nola's AKA nolahorserider's blog the other day, found out the mystery that you were trying to solve was the fact that I am out of my wheelchair and walking but here's the rest of the mystery . . .

I was accepted to the Mayo Clinic, in their PRC (Pain Rehabilitation Clinic) Program in the hopes that they would be able to get me up and out of my wheelchair and walking again. There were two people who told me before I entered the program, very strategic people in this program, that they indeed could have me up and out of my wheelchair and walking during my first week there. When they both told me that and neither one of them was present in the room when they had a one on one conversation with me and when they came together so it was the three of us sitting down they both said it again and my response was, "If you can get me up, out of this wheelchair, and walking, and no surgery is required, let's get this thing DONE!"

Well, that's exactly what God did because He had told me more than a year and a half ago that I was up and out of my wheelchair and doing my 5Ks again, so I waited. Sometimes I didn't wait too patiently because I was getting irritable but I still waited because God will keep His Word, no matter how long it takes. Now, mind you, I had never heard of the Mayo Clinic concerning me and it was not even a blip on the radar when God told me this. Well, on day three of the program, I laid the walker down that I was on for part of my second day and I have not looked back!!!

Below you will see a picture of my car now and let me know if you notice anything different about it. 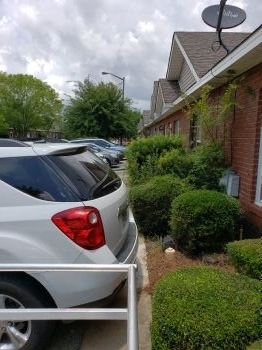 If you haven't noticed, there is no longer a wheelchair lift on the back of my vehicle and I can now back into a parking spot which I have not been able to do in over two years. When I went to Quail Country and asked Gary to take it off, he told me that he had heard a rumor. I asked him what the rumor was because I knew it was about me and he told me that he had heard that I wanted it removed because I didn't need it anymore. I told Gary that usually, you should not pay any attention to rumors because normally there's a bit of untruth in them, but I told him that this rumor was completely TRUE!!! He asked me if I was sure and I told him that God's children go forward and not backward and he gave me a high five and I was not charged for him removing the lift. I took it to my storage unit along with my manual wheelchair and cushion and the young lady that works there helped me get it into my storage unit.

So, now you know that it was a message from God that I waited a bit more than a year and a half to come to fruition and there was "NO" surgery involved, that is cutting with a scalpel but certainly surgery from God's aspect.