Smoky the Cat (sung to "Felix the Cat" theme song) 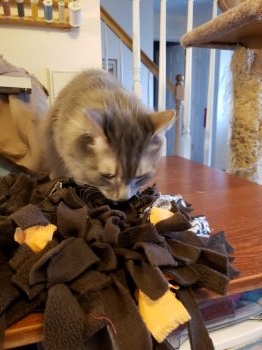 Normally the pups figure in the blog posts. But today Smoky the Cat gets his due! He is a sweet, affectionate thirteen year old grey, long-haired tabby kitty. We've been his "parents" since he was eight weeks old. He's our second boy kitty and second grey kitty. The first cats in each of those categories were super sweet as well! So the combo has been a joy.

He is a dog savvy little guy, as evidenced by his taunting of all three dogs he has shared his home with. Smoky knows that if he stands his ground, the pups will not go for him. At least, our pups haven't. I suspect there are dogs out there that would. But they don't live here, thank goodness!

Lately, I have been trying all sorts of homemade brain games with Cookie and Bear. One of them is called a snuffle mat and that is what Smoky has his head stuck in in the photo. I took his treats and sprinkled them on it and let him root around to find them. It gives him a little mental stimulation. He still hasn't found all of them, though!
Share This Post With Others
Report Inappropriate Blog
Member Comments About This Blog Post