I've missed you. I love checking the feed throughout the day and seeing what everyone is up to. Thought I'd finally sit down and do a little catching up. Side note: Go Awesome A Team! You're doing amazing in the 5% Challenge.

I wanted to tell you about a couple of new tools that I'm using on my Spark journey. The first one is really fun. Well, let me back up a bit. Remember me telling you that my Creative Arts Team gifted me a subscription to all the shows in the current Broadway tours series? That's been a lifelong dream for this theatre geek. I've already been to two of the shows and it's been like Christmas morning both times. 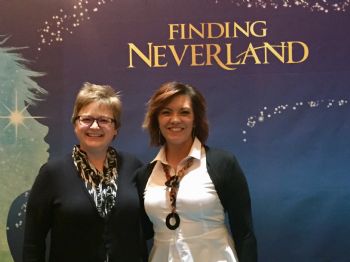 My first show with my BFF, Shelley. It was also her first time seeing a Broadway production, so that was extra fun. And then after the show, we met the dogs and their dog handler in the parking garage. We even got to pet and play with the dogs. Honestly, it was more exciting than meeting the human actors. lol 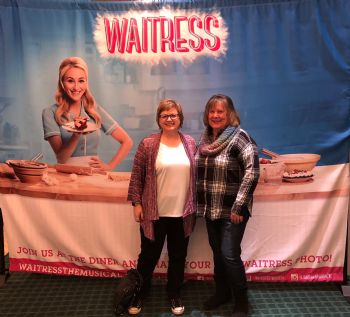 Second show with my friend, Edie. And no, we didn't eat a single slice of pie all night! (Although when she came to my door to pick me up, Edie brought a homemade pie. I may have had a slice the next day...)

Anyway, I mention that just to show you how amazing these people are. Not everyone gets to work with their best friends; I'm eternally grateful. Then, in Oct. these people surprised the heck outta me for Pastor's Appreciation Month by giving me an Apple Watch. They knew I've been drooling over one for a while, but had no expectations of actually getting one. It was just fun to think about. They filmed me opening it and my complete surprise and delight were pretty funny to see. Probably the same reaction my 9 yr old self had, opening my Charlie McCarthy ventriloquist doll on Christmas morning. Some things never change.

Part of the reason I wanted the watch was for all the health monitoring options. It measures heart rate, reminds me to take time to do deep breathing, reminds me to stand up on the hour, tracks my workouts, counts steps, tallies mileage, and encourages me to keep moving. Now, it's all about closing these rings. 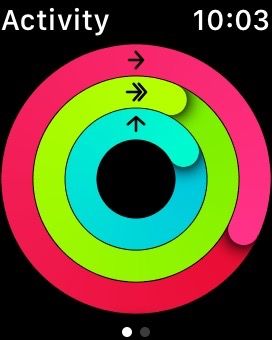 The fun part is that several of my friends have watches and we've shared our activity with each other. I get notifications during the day when they complete workouts, close rings and earn achievements. I can quickly tap an encouraging reply and we cheer each other on. Sundays, I'm at church from 7:15am-2 or 3pm. I have an open hour, in between morning services, and several of us have taken to walking a mile or so during that time. Closing our rings together. It's so much more fun that way. 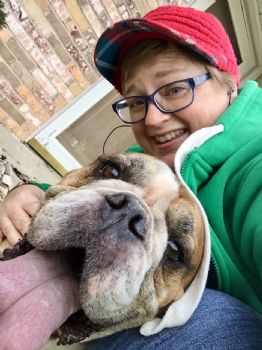 Of course, I still walk with this guy, weather-permitting. I'm also currently trying to learn some choreography to a number from "Grease," just because it's fun. And hula hooping--always hooping.

Activity's never really been the problem. Food has always been my biggest trip-up. Remember Shelley was trying to help me with that, by doing some meal planning? Bless her heart, she really tried. I just didn't realize it was gonna involve heavy-duty carb cycling. I found out I don't do too well with that. It's a great fit for her, but I really struggled with it. So I'm back to doing my own thing.

Couple of things are helping with meal planning. One is that we have Kroger clicklist available at our grocery store now. It allows you to log onto an app, select all your groceries and schedule a time to go pick them up. They bring it right out to your car. We're still getting the hang of it; we've only used it a couple of times. It's better if Randy can sit down with me and make the list, because I tend to forget things. The offspring in the house also have access to the app, so they can add their own stuff too. I want to get into a routine where we plan a menu, make the list and schedule pickup the same days every week. I think that would help cut down on a lot of panicked, last-minute fast food runs or nights when we're all standing around looking at each other and wondering what's for dinner. We're working on it.

Another helper is the Pressure Cooker Randy got me for Christmas. He was so excited about this thing. The cooker he ordered was on back order, so he had cookbooks start arriving the week of Christmas. When the cooker actually got here, we all stood around and admired its shiny loveliness. We'd all been looking at recipes and were ready to start cooking. When we put it all together, we discovered it was missing the pressure release valve. I have no desire to blow up the house, so Randy spent several days and hours, wading through tiers of customer service. When we finally got the replacement part two weeks later, it was missing a piece. The replacement part was missing a part... I would love to re-enact all of Randy's mayhem with customer service. After a month of wrestling with this thing, he finally sent it back and ordered another one from a completely different place. He was so frustrated, he ordered the biggest one he could find. I think it eased his pain. Now I have a 14 quart pressure cooker that's roughly the size of a hot tub. But it's amazing! Anything that speeds up my time in the kitchen and still delivers a healthy dinner that doesn't take Julia Child skill level, is a helpful tool in my book.

Randy also decided that he wanted to try one of those air fryers. I think perhaps he's been watching a lot of infomercials when unsupervised. He thought it sounded like a great idea, so when he saw a Groupon offer for one, he jumped on it. I put the whole thing together last night. It looked like a cross between a robot and the incubators Audrey's kindergarten class used to hatch baby chicks. But hey, I'm game. Randy sat and sliced sweet potatoes while I cooked a pork loin in the Mammoth Pressure Cooker. We seasoned the potato slices with a little salt and a dash of cinnamon and nutmeg. We placed everything in the air fryer, plugged it in and started it up. The Offspring wandered in to watch. We stood around, watching it light up and waiting for something to happen. Nothing happened. The fries just sat there. If this had been kindergarten, none of the eggs would've hatched. Turns out, the fan was broken and we got a defective machine. It pains me to even reflect on Randy's look of disappointment, especially after slicing all those sweet potatoes. From the bottom of my Southern toes, I say, "Bless his heart." He had his daily, routine call to customer service and we're supposed to get a replacement, as soon as he ships this thing back. I'll let you know what happens.

So there are three positive things that we hope to use to make better food choices. Now here's one we didn't quite plan. This week, Randy was diagnosed with Type 2 Diabetes. He's still trying to process that. He's had training with the finger prick stuff, he's taking medication and we're learning new vocabulary. I told him I'm probably only a step or two behind him, so we're doing this together. (He offered to prick my finger yesterday, but I politely declined.) We know it's not the end of the world. We actually see this as an opportunity to make better choices together. We have to, so we will. Randy arranged a super romantic Valentine's date for us with his nutritionist, and we're going to an in-depth class to get up to speed. We'll tackle it like we do anything else, together and with a large dose of humor.

2018 is already turning into a big year for my family. We're figuring out the new order of things with Randy's diagnosis. Audrey's getting ready to graduate and we're helping her make plans for her next big step. (She's looking at moving to Florida and attending a Film/TV Makeup school. We are SO excited!) Shelley and I are publishing our book. Remember the book that we started in 2016? Well, it's taken on new life, new format, new everything and this is the year we make that happen. I can't wait to show y'all. So many changes, some challenging, some exciting--all of them with potential to make a positive difference. Somewhere in the midst of all that, I want to lose 20 pounds. 18 to go!

I'll leave you with the latest pic of my Friendship Rock Garden. I absolutely love looking at and praying over these rocks every day. They look just like the people who painted them!! 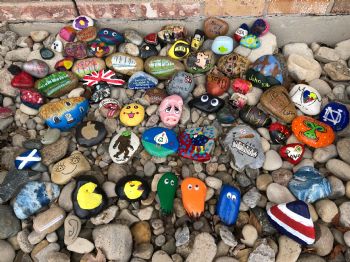