My inspiration to cook seems to come in spurts. The new year, a refreshed mind and body seems to have brought me inspiration!

Last night I got it in my head that I wanted meatloaf, mashed potatoes and corn. In our house, that means different things for different people. For DH and DSD it means good old fashioned meatloaf and mashed potatoes with a half a stick of butter and whole milk in them. (Some people get all the luck- haha) I don't believe I've made meatloaf in at least 10 years so I had to look up a recipe. According to the Pinterest pin it is the "Best Ever Meatloaf Recipe" so I figured why not.

Both DH and DSD really enjoyed this meatloaf. They said it was both flavorful and moist. It apparently was nice and dense as they both looked like they were going to roll out of their chairs after dinner! The only thing they did not like is the glaze on top. (which I ended up putting on my meatloaf as well and I agreed with them) It was just way too sweet! I would put the same amount of ketchup and mustard in the glaze but half of the brown sugar or less. Perhaps some Worcestershire sauce would help as well - making it more of a homemade barbecue.

For me, it was homemade meatless loaf and mashed sweet potatoes!

This is the recipe I used for the vegetarian meatloaf. The blog writers are correct - it's hard to believe it's vegetarian! It's got great texture and wonderful flavor!

I only made a few slight changes. Instead of white bread I used whole wheat, I added a 1/2 cup of tomato sauce and did the glaze the same as DH's recipe. The glaze in this recipe is similar except I used regular mustard instead of dry mustard and I didn't have nutmeg. I'm happy I added the tomato sauce as I think it gave it better density and made it more moist. It was absolutely delicious and I brought leftovers with me today! 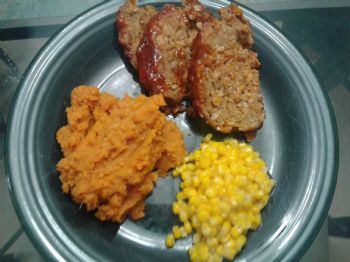 Along with the meatloaf I made mashed sweet potatoes. I combined a few different recipes and the flavor combos of this recipe to it as well. (I only used the spices from this recipe)
www.imagelicious
.com/blog/spicy-mashed-swe
et-potatoes
In a nod to whole 30/paleo I used coconut oil instead of butter and then I used soy milk instead of regular milk as it's what I prefer most of the time. (in order to be completely whole 30 I would have had to use coconut milk which I have never bought). I'm actually contemplating doing whole 30 for an upcoming month challenge so I'm continuing to try some of the switches.

And as if cooking for hours last night was not enough - I still had to cooking bug this morning! So with my extra time earned from not hitting the snooze button I did some meal prep! I didn't have any breakfasts meal prepped and had the ingredients and time to make this breakfast sandwich recipe.

showmetheyummy.c
om/healthy-breakfast-sandw
ich/
I enjoyed the idea of this recipe but the specifics were all off. For instance - why would I cut out the eggs in circle shapes and leave all that waste? So I made this recipe based on that one and it turned out great.
recipes.sparkpeo
ple.com/recipe-detail.asp?
recipe=3329161

I had one for breakfast this morning and froze the other 5 for the future! 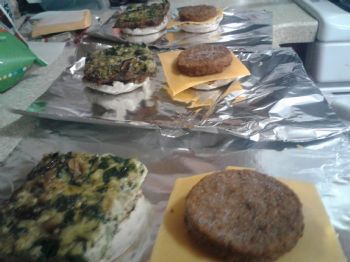 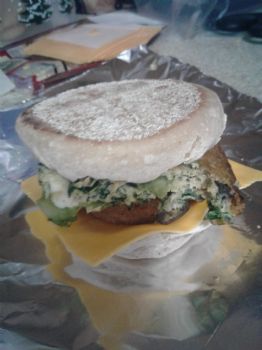 Tonight for dinner, I think I'll take it easy on myself!

Last night I didn't get to read with DSD. By the time I got home from work she was already home and reading. I had to hurry up and get dinner cooking since I planned to do something involved. I read again instead before bed. I'm really getting in to the book now and plan to read often. Only thing I can say is I can't wait until 10 every night and plan to read for 20 minutes and go to bed. I'm getting too in to it and ended up reading until 11 last night! That's a little too late for this lady on a week night!