One of my SparkFriends recently posted a comment about my Halloween profile picture. Kdylose posed: Your cat looks like he's not sure what he thinks about all those pumpkins. 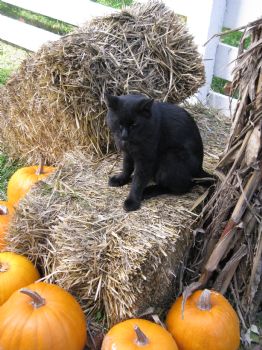 That cat has a nice story behind him. I snapped the picture on a fall vacation at the Shaker Village in Kentucky back in 2012. They were decorated for the holidays and the cat was just hanging out on top of the hay bale like he was posing. After I took his picture, I went over to pet him and he was very sweet and friendly. I noticed he was missing the tip of one ear. I also saw some bowls nearby, one full of water, and the other with a few pieces of dry cat food. I asked one of the employees about him, and he told me that the cat just showed up one day and has been there ever since. The employees leave him food and water and he, in return, entertains the visitors. He also told me that a local animal group rounds up strays, spays or neuters them, and clips their ears to mark them. The clip on that cat's ear was straight across, and likely was a result of that treatment. The employee also told me that I was welcome to take him home with me if I wanted to. If I hadn't already had two at home waiting for me I probably would have.

I haven't been back to the village since (it's about a 6 hour drive from here), but every October I use that cat's picture for my profile pic. I often wonder what happened to him. I'd like to think that someone eventually took him home but on the other hand, he appeared to have found himself a pretty sweet job with some super nice folks.
Share This Post With Others
Report Inappropriate Blog
Member Comments About This Blog Post