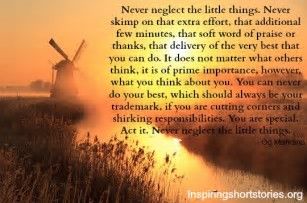 "Never neglect the little things. Never skimp on that extra effort, that additional few minutes, that soft word of praise or thanks, that delivery of the very best that you can do. It does not matter what others think, it is of prime importance, however, what you think about you. You can never do your best, which should always be your trademark, if you are cutting corners and shirking responsibilities. You are special. Act it. Never neglect the little things."
Og Mandino


A fellow stopped at a rural gas station and, after filling his tank, he paid the bill and bought a soft drink. He stood by his car to drink his cola and he watched a couple of men working along the roadside. One man would dig a hole two or three feet deep and then move on. The other man came along behind and filled in the hole. While one was digging a new hole, the other was about 25 feet behind filling in the old. The men worked right past the fellow with the soft drink and went on down the road. "I can't stand this," said the man tossing the can in a trash container and heading down the road toward the men.

"Hold it, hold it," he said to the men. "Can you tell me what's going on here with this digging?"

"Well, we work for the county government, " one of the men said.

"But one of you is digging a hole and the other is filling it up. You're not accomplishing anything. Aren't you wasting the county's money?"

"You don't understand, mister," one of the men said, leaning on his shovel and wiping his brow. "Normally there's three of us--me, Rodney and Mike. I dig the hole, Rodney sticks in the tree and Mike here puts the dirt back."

"Yea," piped up Mike. "Now just because Rodney's sick, that don't mean we can't work, does it?"