Running behind blogging about my awesome adventures.... but better late than never.. right? I have had a busy Summer and most of my spare time I have used to get in my daily walk / run. I'm doing pretty good with that, however August has a number of days where for one reason or another I didn't get everything done I had planned.

On to the subject of this blog however... a recap of the Girlfriends Triathlon on Aug 19th! This makes the seventh year in a row that I have participated in a Sprint level triathlon. This is the second year doing the Girlfriends Tri in Vancouver, WA rather than an event in Seattle. It was also great to have four other ladies from my town participate. Usually it is only one or two others... and this year two of the ladies were first timers. It is really fun to see the event through their eyes and see their excitement when they finish. 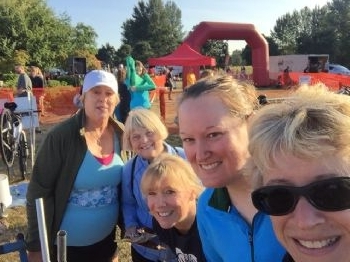 Vancouver is a nice venue and a little closer to home. It is nice to have a shorter drive after you finish as sitting in the car can be hard after an active morning. The other nice thing about Vancouver is the swim portion of the event is in the Columbia River and we swim parallel to shore. In some areas, you can actually stand if you need to rest and the current flow also helps. I am a pretty weak swimmer so it can be exhausting. Let me tell you, 1/2 mile swim seems to go by at a snail's pace. 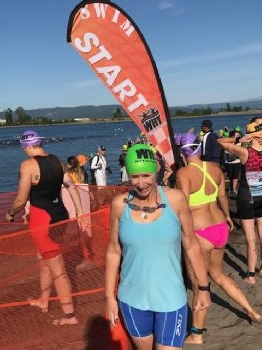 In addition to the Sprint Triathlon, the Girlfriends event also included divisions for a Team Relay as well as a Duathlon (Run, Bike, Run) and Aquabike (Swim, Bike,), a 10k run and a 5k run.... so there was a lot of activity going on. The DH and I drove in to the event a day early to get my packet and we stayed close by in the RV. We got permission to park overnight in a parking lot; however it wasn't a good choice as the road noise was bothersome. Also, since we weren't hooked up to electricity we weren't able to run the air conditioner to block the noise and we also got warm. Next year I will remember to make a reservation at the RV park early enough before they are sold out.

My division was the last wave in the water. That actually worked out okay as there were less people swimming and bumping into me. My DH was able to walk along the shore as I progressed and I caught a glimpse of him every now and then. 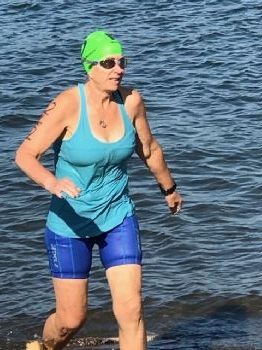 After I exited the swim, I made my way to the transition area to get ready for the 12 mile bike course. The transition took longer than I had hoped as my shoelace was caught under the tongue and I couldn't get my shoe on! After wrestling with it I finally got my shoes on over my wet feet and realized the problem. No way could I start the bike with that problem so off came the shoe and I tried again. Finally had the shoes on, ran a comb through my hair, put on my bike helmet, and headed out. This is where things went from bad to worse. I'm on my bike behind and between two ladies when one brakes hard and swerves in my path. No way to stop in time and I bumped right into her and took a tumble onto the asphalt. She managed to stay upright and off they went into the distance. I was able to stand, was thankful I didn't break a bone; but I was scraped up and bleeding a little. I checked out my bike which also looked okay and made the decision to continue. I was a little shaky but quickly got into a rhythm. The weather was perfect, not a lot of wind and temperature was comfortable. I enjoyed the scenery and just tried to do my best.

After finishing the bike portion, I entered the transition area, racked my bike, removed my helmet and prepared to run the 5k (3.1 miles). This transition went smoothly.. hooray! I feel comfortable with the run portion of the event and knew at this point I would be fine. The run course is a paved trail which is best for me. Surfaces that include gravel, dirt trails and rocks can all be difficult and increase the likelihood of a fall. My legs felt heavy so I was pleasantly surprised when I checked my Garmin and saw that my pace was a little faster than typical. I think it might have something to do with muscle memory after the bike ride. 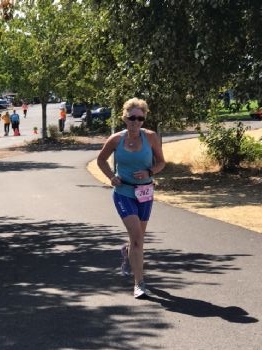 I finished the run and crossed the finish line with a smile. The medal they gave out is really cute with dangling swim, bike and run charms. Clever! I figured it would be a good idea to check with the medical tent and get disinfected and bandaged. 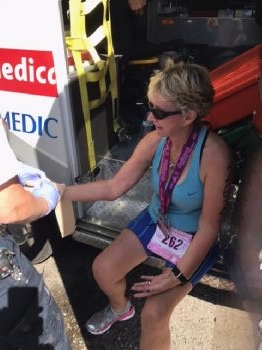 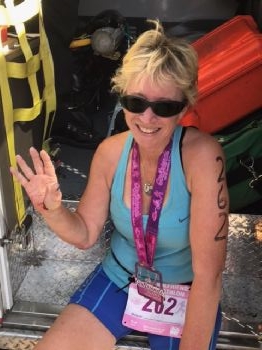 The grips on the handlebars of my bike (which are white) were a mess from my right palm bleeding. I was concerned that the grips were ruined and might need to be replaced, however my DH assured me that he could fix it. (and he did)

Here is my elbow in all its glory a few days later. 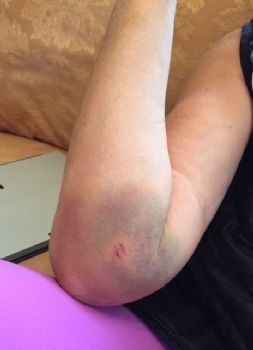 The food after the event was good. It wasn't lunch time yet, however I decided to go ahead and eat early. Egg Casserole, Fruit, Bagels, They even had mini cupcakes and chocolate strawberries. I abstained and DH, being the good guy that he is helped me out with those.