Another good day yesterday! Food was ok (considering I really wanted to binge yesterday afternoon), water & fitness minutes were good. Steps could've been better, but late in the day I wasn't feeling the greatest, and laid around most of the evening. Even though my food choices could've been better, everything was tracked and in range! 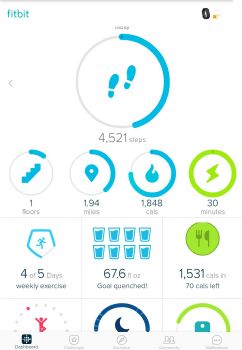 In other news, the doctor finally called yesterday with the results from DH latest CT scan. He said the area of the lung that has been treated looks good. There's area's of imflamation (from treatment), but nothing they're concerned with. GREAT! Then he said that there's a "spot" at the base of his neck, that they're not sure what it is. It could be just deterioration from aging, or it could be bone cancer!!

So now, we have to go for a MRI Sept 1, which just so happens to be the exact date hubby was diagnosed last year with the lung cancer! UGH!!! Can't we just get a break?!?! The doctor tried to reassure us that it's "probably" nothing, and they're just checking as a precaution and because of medical history, but how do you not worry after going through this twice already?
Anyway we're trying to stay positive right now, but continued prayers and well wishes would be greatly appreciated.
Have a super Saturday spark friends!
Share This Post With Others
Report Inappropriate Blog
Member Comments About This Blog Post