In it, I detailed the feeling of my invincible willpower suddenly departing in November 2014, as if a switch had been simply switched off. At the time, I assumed that it was simply a bump in the road, but in reality it turned out to be an almost three year detour that took me far away from the version of me that I had come to love so dearly. I said in that blog that "... it's as if I fell asleep sometime in November, and simply haven't woken up yet...", and over the last two and a half years, I put on 25lbs, lost most of my muscle mass, and found myself plunged back into an emotional abyss where I wanted so badly to get back on that horse, but lacked the internal spark to do so. I documented this with a smattering of posts in the past two years, with a concerted effort last year to at least go through the motions, but without that will to be strong in both heart and mind, the body fell to new lows each month. Consistently, I'd try to philosophize internally about how one goes about getting that spark back, that raging fire of determination... and every time I'd come up empty. Two years, nine months, and all of a sudden... it's back.

I can't explain why. I can't explain how. It's not like I did something different, or tried something new. It just suddenly, as quickly as it had switched off, switched back on. I've been on top of my eating and drinking for about a month, and am going on almost three weeks now of steady exercise. The difference between this and my attempt last year, is that it isn't just going through the motions. It's a fierce knowledge inside of me saying "this is really happening, you're losing weight, you're going to lose it all, and nothing is going to stop you". I'm down 8 pounds from 210 to 202 at my last weigh-in (unofficial), and I find myself looking forward to each and every workout again. I take joy in my exercise time, and more importantly, I take joy in making the time to exercise. I wish there was some significant catalyst that I could point to, apart from just not being happy with my body image, but nothing stands out as a cause for the sudden turnaround. Much like when I lost 85 pounds in 2013, I just find myself suddenly on fire, clicking on all cylinders, and excited about where the road ahead will lead. Not sure I'll be blogging much, or doing much sparking, but I thought it significant enough to post something saying that maybe willpower isn't something that can be forced, or bottled and sold, or faked until it's made... maybe willpower just needs time, and an ear to the ground to listen to it when it finally comes alive again. Dunno... but it's nice to be back. :D 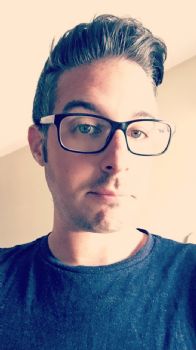