Well, sh!t. I was hoping all my positive changes weren't too late. But, I was wrong. It's still not too late, but in the meantime I'll be doing medical damage control.

When I got back from Comic-Con I had my annual "lady appointment" and I was able to bring up to my doctor that my legs had been swelling up, from knee to ankle, for the last several weeks. I even went so far as to get compression socks and a wedge pillow to elevate them. It initially started happening after I'd work out, then on my rest days, then all the time. Of course, walking around at Comic-Con didn't help. I mean, 15,000 steps a day will do that! When I got back, the swelling hadn't gone down. So, when I was at my appointment, they were still quite swollen and my doc was able to actually SEE them. She was even able to press her thumb into my flesh and it left a divot that took it's sweet time disappearing. They had taken my blood pressure and pulse rate at the beginning of my appointment. Both of which were elevated (131/89 BP; 100+ for pulse- I can't remember exactly.) Normal BP should be below 120/80.

So, doc told me to make an appointment with my PCP, which I did immediately. My PCP asked me to do some labs immediately so they'd be in by my appointment. Just a blood culture and urinalysis- standard stuff. I got to my appointment, found a 5# difference between doctor's visits- woohoo, I think?!? But, sure enough, my blood pressure was still elevated (136/92) and my pulse was 104. Anything over 100 is considered tachycardia. Anyway, all my labs came back well within normal ranges. So, aside from the blood pressure and tachycardia, I'm perfectly healthy. Which also means there doesn't appear to be any reason for either of those issues! That means now I'll be seeing a cardiologist. There are heart problems in my family, so it's better to be safe than sorry. High blood pressure is common in my family. Atrial fibrillation, heart attack... all in my family history.

So, the blood pressure and pulse stuff explains my swollen legs. It also explains this intense fatigue I've been struggling with (around the same time the swelling began, sometime in early-mid June). I assumed the fatigue was just me running myself ragged taking care of my mom, granny, household, work projects, church, etc. It's still possible that these things contributed, but certainly my medical problems didn't help. I've been able to sleep during the night, go to work, come home, take a nap for a few hours, get up and make dinner or whatever, and then go back to bed and sleep all night. On repeat. For weeks on end. So many stressful things happened at the same time, so I just assumed I was tired from the stress. Air conditioning breaking, catastrophic water heater meltdown flooding out two rooms in my house, living with jerks, having lots of work projects going on... anyone would think the stress was wearing them out. It never occurred to me that my fatigue would be rooted in medical issues! I've been put on blood pressure and pulse lower medications for now. I'm a 34 year old with 82 year old problems! I'm on the same meds as my granny and I'll be seeing the same cardiologist she sees. Yeesh!

Just because I've been needing to for a long time, I made an appointment with a counselor. Maybe dealing with my depression will help. Perhaps I'm experiencing anxiety, too. I wouldn't know what anxiety felt like if it wasn't a traditional heart-beating-out-of-my-chest type nervousness. I know that's not all of what anxiety feels like, so it's possible I've been having anxiety issues and mistaking them for something else. And clearly, not being able to deal stress very well doesn't help. Its time to take care of myself. I take care of so many other people and putting myself on the back burner. I won't be around much longer if I don't start putting myself on the list of people to take care of because right now I'm not on the list at all!

I'm still working on taking care of my health as far as diet and exercise go. I didn't go to the gym when I got back from Comic-Con because I was literally just so exhausted. I went twice last week with plans to go 3 times. I was going to go on Friday, but I had to take my mom to SD on Thursday for a few doctor appointments. Starting my new medication, plus still experiencing fatigue, I was totally wiped out on Friday. It was all I could do to get through work. When my body starts adjusting to the meds and such, I'll work on increasing my gym time. For now I think I can get through two sessions a week. Hopefully my body will adjust sooner rather than later and I won't be affected like this anymore. In the meantime I've been told to reduce my sodium intake and cut out soda (no problem, I rarely drink it), alcohol and drugs (no problem, I don't do drugs and I drink MAYBE twice a year), but the hard one: cut out coffee. I'm not really one of those people that drinks coffee daily and needs it to wake up in the morning. There are definitely days when I can use the caffeine boost, most of them fairly recently with this nagging fatigue, but I mostly drink coffee because I enjoy it. I'll literally sip on an iced coffee all morning just enjoying the flavors and texture and temp. Heck, I usually order decaf or half caff. Too much caffeine gives me anxiety and the shakes. Oddly, I wasn't told to lose weight, but I did mention that I'd come from the gym at my appointment, so maybe my doc already figured out I was working on that.

I really wanted to tell y'all about Comic-Con and end on a positive note, but I think this will get too long if I do. So, I'll save that for a little later this week. If you are the praying sort, I could use some prayer obviously. If you're not, send me some positive vibes and release some good thoughts for me into the universe. 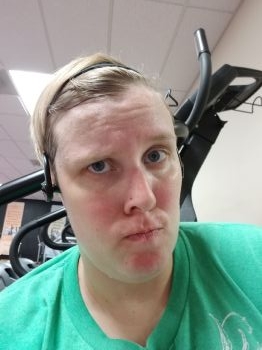