I finished my first tram and I couldn't be more proud. I ended up biking 260 miles within the 5 days. I meet new friends, raised money for a great cause, and had a blast while doing it! Here is a recap of how the 5 days went:

TUESDAY evening: My hubby and I traveled the 3 hours up to Alexandria, MN to stay the night in a hotel before our biking days begun. The drive up was stressful as the bike rack did not fit well on our Ford Edge. We had to make a few extra stops to ensure it was secure and we also hit some traffic which was not fun. But we finally made it to the hotel and was able to check in and then head out to dinner with Matt's friend from High-school who lives up in Alexandria. The beer was much needed after the drive up!

WEDNESDAY: We were up bright and early to get to the fairgrounds to start our ride. I had butterflies in my stomach as I didn't know what to expect. I was worried about getting lost on the route and just being a newbie made me nervous. My husband was awesome and stayed with me to show me the ropes. We loaded our luggage up on the truck, grabbed some water, and we were off to ride the first lag of the trip. About 45 miles to Long Prairie, MN. The first 20-25 miles were a breeze. Some hills but we were making great time. I was chased by a dog which was not fun. And we were getting hit with butterflies galore on the side of the road. But after rest stop #3 it started to really get windy. We had a very strong head wind for the remaining 20 miles and my legs/knees were feeling it. But we made it to the camping site around lunch time and were able to get settled in before being hit with a little rain.

Here is a pic of some of the tents 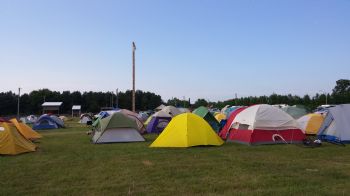 THURSDAY: This biking day was tough for me. I woke up very sore and feeling like I didn't want to bike. I didn't have the greatest nights sleep and was just crabby all together. We had about 63 miles to go getting us to the next town and my legs were super sore from the day before. I also did not wear padded biking shorts day 1 or day 2 which was a HUGE mistake. My rear really felt every single bump. And the roads we were biking were not gentle roads. Lot of hills and lots of sun for this biking day. I looked forward to seeing those bright orange signs saying "rest stop" and just keep saying in my head that I can do this. We made it into Wadena, MN and I couldn't be more happy to be done for the day. The walking afterwards was much needed for stretching out my legs and food tasted so good. LOL!

FRIDAY: Friday for some reason I felt awesome! With all the extra stretching I was feeling pretty good. This day I actually wore my padded biking shorts and what a difference they made. I also realized that I had been biking incorrectly with my feet position so after switching some things up, I wasn't feeling much knee pain. (Most bikers have the clips or cages. I had neither and was not biking on the ball of my foot.) We went through Amish country which was interesting. And also biked through a working wood mill, Phelp's Mill. 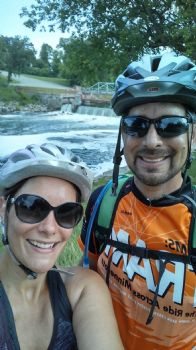 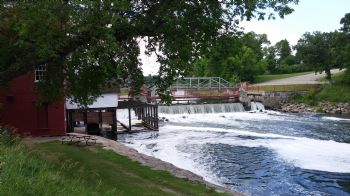 SATURDAY: Decision time... Since we were staying in the same city Fegus Falls, MN they gave us a decision for biking. We could either not bike at all, bike half the distance, or bike the full 78 miles. Friday night I had planned on biking the full distance and my hubby decided he was going to do half. But then the storms rolled in. About 3:30 in the morning we started getting high winds and then we were evacuated from our tents at about 4:00 and moved to the city hall. We had to stay there until the strong storm passed which it didn't stop until about 6:30. After getting back to our tent and checking for any leaking, I was exhausted. My head was pounding due to the lack of sleep and I was super tired. My hubby decided he wasn't going to bike at all which surprised me. I decided I was still going out. I headed out on the road at about 7:30 and the route was all HILLS! I felt so tired that it was difficult even getting up to 14 MPH. So when it came time to decide which route to take either the short route or the long one, I ended up going the short route. As soon as I turned I immediately felt guilty. This wasn't supposed to happen. I was to bike the full 300 miles and that was my goal from the start. I felt defeated and disappointed with myself. The route ended up being all hills until the last 10 miles or so. Even though it was shorter, it still was tough. I ran into a few long time tramers that ended up taking the shorter route and they tried to make me feel better about my decision but I was still disappointed.

Group pic before heading out 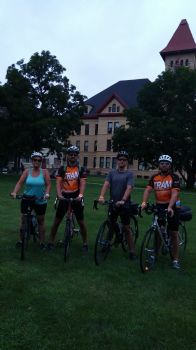 Since I took the short route and this last 48 miles to Alexandria were going to be all bike trail I thought I needed to push my limits. So I took this last 48 miles as a sprint. And boy did I sprint! I ended up keeping speeds of 20 MPH for most of the ride. The last 10 miles or so though I was getting pretty tired and ended up with averaging about 15 MPH. But I was feeling good and it was exciting to finally be done.

A pic of me and my hubby at the finish line 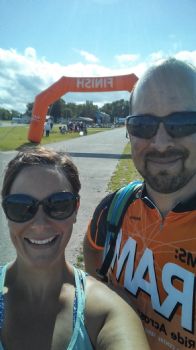 A pic of me, my hubby, and a couple of new friends from the Tram 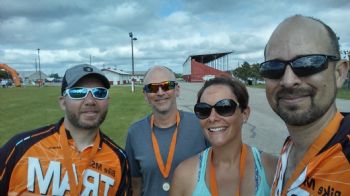 It was a hard 5 days but well worth it. And I can't wait until next year!
Share This Post With Others
Report Inappropriate Blog
Member Comments About This Blog Post