What a beautiful day for a run! Since this is a hometown venue, I was able to get up at a normal time and enjoy my regular routine. I typically go to the gym for a class Mon-Fri at 9:00am; so having the Beach Run start at 9:00am was perfect. I signed up for the 10k and DH was registered for the untimed 5k Prom Walk.

After giving breakfast a little time to settle, we dressed and headed to the start line at 12th and Prom... about a mile from the house. We found parking just a block away which was a bonus! Skies were slightly overcast and temps in the low 60's with no wind. What could be better? I chatted with a few folks at the start line while the DH went to the bathroom. 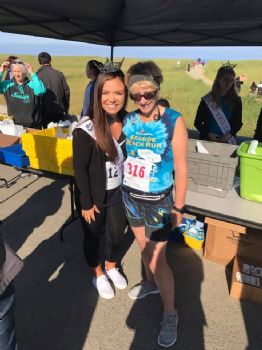 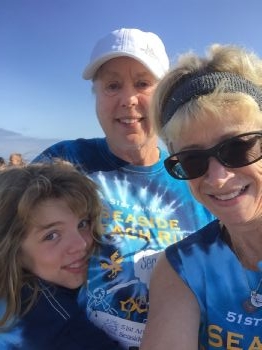 The walkers were starting on the Prom (a walkway that borders the beach) before the runners (who start on the beach) so I planned to see him get started before I walked down to my start area. Oh oh... start time came and went and no DH. He hasn't been feeling well so I'm thinking he bailed. I headed down to the beach start line and lo and behold... there he was. He said he didn't see me so went to the beach looking. Right.. Anyway, it is his decision whether or not to walk so no problem for me. After runners were instructed on the course, we were off... the 10ker's running North and the 5kers running South on the beach. The field was pretty small and within just minutes I was at the back of the pack. Usually, there are some walkers so I never feel like I am the caboose, but this time.. I'm the caboose. It is what it is and I just ran my normal pace with walking intervals every now and then. The biggest challenge with the beach run is the soft sand we run into when heading up the estuary (and coming back) and also at the finish line. Wowsa... that is a killer.

There wasn't a lot of activity on the beach and I just zoned out and listened to my tunes and enjoyed the scenery. As I was running back heading South by the 12th Avenue approach, I saw DH and he took a video. Cool. The course is an out and back and so as many of the faster runners were heading back North as I was still going South. It is always fun to see great running form in fast runners and I give High 5's when it is convenient and they seem receptive. As I was finishing my last half mile, I passed a lady who had just about used all her energy reserves. I felt bad; but on the other hand I have never been dead last so was happy to save that honor for some future event lol. As I was coming into the finish, there were still some spectators cheering which was great.

After finishing, we headed over to the park about a block away. The Beach Run event is sponsored by my local gym, Sunset Family Fitness, and proceeds raised go toward sponsoring teen gym memberships. They put on a little awards ceremony, serve lunch and have door prizes. The lunch today was pizza. DH had a blast eating his (and my) pizza as he doesn't get that stuff at home. I had planned to bring my pizza home with me so he could have it for dinner, but he ate it on the spot. When he went back for seconds (so he would have some to bring home lol) they gave him a half pizza left over in a box. He was in seventh heaven.

The awards ceremony was they put on was cute. They had brought exercise steps from step class and had the set them up as a winners podium for 1st, 2nd and 3rd place. They called forward people who then stepped on their podium and received medals (or silver plates in the case of the overall Male/Female and Male/Female Masters Winners). The medals were inscribed with the Beach Run logo which was nice. I came in 1st in my division (Women 60-69). That is pretty funny as all I had to do was show up and finish. I was the only one if my division! Still counts... Score! 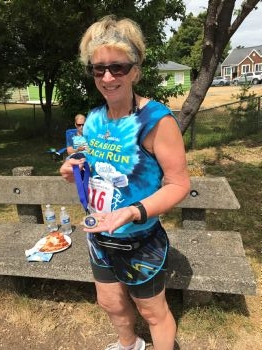 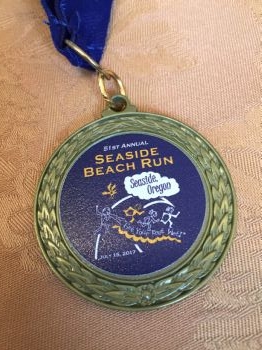