I know... I still haven't finished my Mexico Travel Adventures blog series, but thought I would interrupt it to post today's run report. 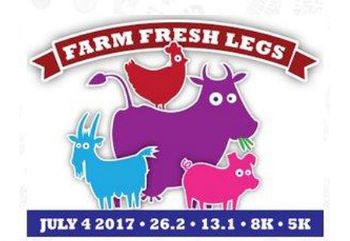 This is the 2nd year that I have run the Foot Traffic Flat. It takes place every year on the Fourth of July on Sauvie Island; just outside of Portland Oregon. The island is a beautiful peaceful laid back area full of farms and self pick produce places. We drove in yesterday with our 5th wheel and as we went around the island we spotted an eagle nest on top of a power pole. Two eagles were sitting in the nest ~ sure wish we had stopped so I could share a photo.

There is an RV Park on the Island but it is very difficult to get a spot and when I called a couple of months ago they were full. Decided to just wing it and see if we could find a spot to park for the night and "boondock". We have a solar panel with an inverter, a gas stove and fridge and a small generator that will run the coffee pot and toaster... so we can rough it for one night if need be .. lol. The event venue starts and finishes at "The Pumpkin Patch"; a local store/farm with a nice large parking area. DH plans to pick berries while I'm running; so after scouting a few places around the island we decided to just ask if they would let us park in the lot for the night. SCORE! They had a large grassed area out behind their store and told us to go ahead and park. After we got parked and set-up, I looked out the window and we even had a view of Mount Hood! 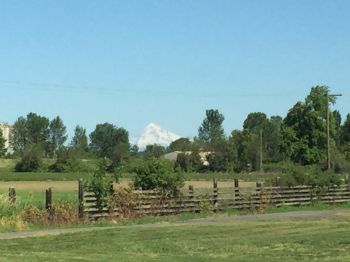 Staying at the race venue was really a bonus since I was able to sleep a little later (we didn't have to drive in) and I didn't have to use the on-site port-a-potties... I had my own! 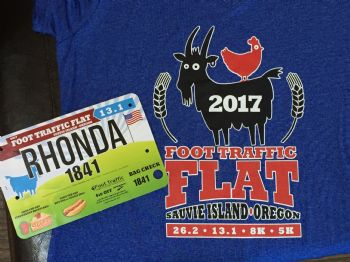 I usually have trouble sleeping the night before an event, but it really helped being able to sleep in my own bed. Got a decent night's rest and then was up at 5:30am to get ready for my 6:50am start. Had coffee and breakfast, and then headed out the door at 6:40am to get to the start line. 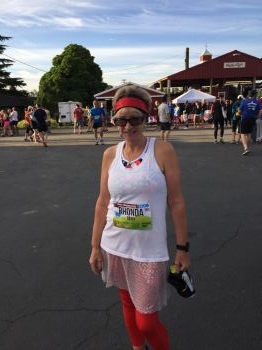 The race started right on time... no corrals to worry about and we just all took off. The island is fairly flat with just a few small rolling hills and weather was perfect. I did encounter some strong wind in areas, but no real issues. Had lots of course support with aid stations and water every couple of miles. I carried my hand held water bottle (which I love... it also holds my phone) so didn't have to stop for water. As I went by the eagles nest on the power pole, I looked for the eagles but they weren't there. They must have been out flying around looking for varmints.

Enjoyed the picturesque course and when I finished I was given a pretty neat medal. It is also a belt buckle 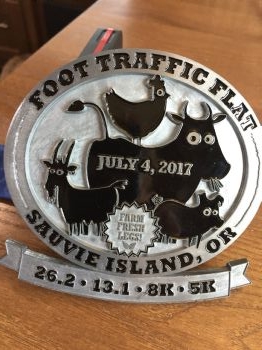 As part of registration, I had a coupon for a hot dog and strawberry shortcake. While I was in the line for the hot dog, a lady came by and offered my DH her hot dog coupon... which he gladly accepted. We got the food and then a finishers photo over by the Brooks "Run Happy" board. 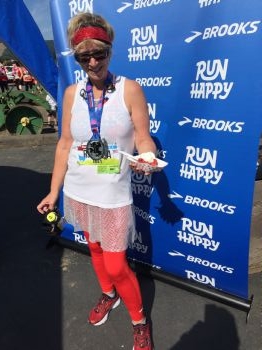 I just had a bit of the shortcake and the DH ate the rest as well as the hot dogs. I have been doing really well staying off the sugar so didn't want to get it in my system. When I have sugar (or alcohol for that matter) my appetite just goes bonkers... so I do better to just avoid. We finished up and then headed back to our RV to get ready to go. We are going to spend the next few days at a State Park campground nearby. DH really gets anxiety from fireworks and such (one of those nice gifts he received from the Vietnam War) so we try and stay in areas for the 4th where we won't run into explosives. Actually, everyone in this family likes the peace and quiet with the camping life. 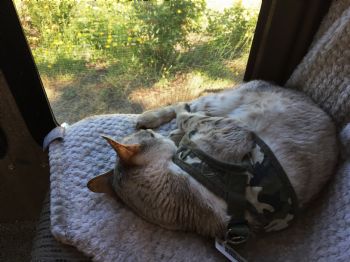 PS - Don't you just love her camo halter? She likes to wear that when we go camping!