Oh my goodness. It's been a long... month. Starting at the beginning with doctor's appointments in San Diego for my mom and grandma. I had a church retreat the second weekend of June. Then, lots of work stuff and not enough time to do it. Last week my mom had surgery. Followed by my granny's birthday. A few more doctors appointments yesterday in San Diego. More trying to play catch up at work. Too little sleep to top it all off. To say I've been struggling would be an understatement. To say I'm exhausted would not be "exhaustedy" enough. I'm just waiting to catch some cold while my immune system is being compromised.

That's not to say I resent or regret anything. My mom & my granny both need a certain, albeit small, level of care that they cannot provide for themselves for various reasons. My mom's mostly stems from mental health and obviously surgery. 99.99% of doctors tell you to rest and recover from surgery by doing as little as possible for as long as you're healing. I get that. My granny's advancing age and slowly (I do mean slllooooowwwwllllyyyyy) deteriorating body contribute to her needs. Both lean on me for their extra care, mostly because I'm the only family member who is going to step up and help without thinking twice about it. And I will do that duty until I'm in the grave! I know it's partly why I'm stuck here instead of advancing my education and career somewhere else. It's my current calling, so to speak.

As far as church retreats go, this one was a lot more low-key than we've done in the past. The idea was to have everyone participate as much as possible in as many of the activities as possible. Still didn't exactly happen that way for the kitchen crew, but it was significantly less stressful. We made the menu full of food that was quick and easy. The night we decided to do chili and soup was a little challenging as it seems some of the kitchen equipment (namely stockpots and dutch ovens) disappeared from the last time we were there. I've never baked chili in a roasting pan before, but it worked! I made a list of items, per the caretakers request, of things the kitchen could use to optimize it's efficiency. Namely stockpots and dutch ovens. The other meals were simple- scrambled eggs, pancakes for breakfast #1, continental for breakfast #2, sandwiches for lunch #1, hot dogs for lunch #2 (plus potluck), and dinner #1 was take-n-bake pizza from Costco that we doctored up with additional toppings. It still takes several hours of work, which was fine with me because the sermons for our chapel services/seminars were pretty boring. No offense to my pastors. The rest of the weekend was fun with just hanging out and being awesome.

Mom's surgery took me out of the comfort of home for 2 full days. Came just in time, too, because we had a mega heat wave starting the day we left. It was 122 degrees Fahrenheit that day, and between 115-118 the rest of the week. BRUTAL. My garden took a beating with that one. Sunburned tomatoes, even with a shade over them, scorched okra shoots, and brown watermelon leaves. Surprisingly, my bell peppers are still doing okay, my jalapeno seems to actually be thriving in the extreme heat, and my eggplant seemed to grow several inches in those few days! I thought my blue lake green beans would have withered and died, as they were just transplanted a few weeks prior and still very small shoots, but they survived. I'll have to try again with the okra, maybe indoors and then harden them off. I'm lucky that I can basically plant nearly anything at any time here and have it grow just fine. Except berries- too hot and too dry. Despite extreme heat waves, we mostly have a steady climate here. Just gotta watch it on the veg that can scorch, like lettuce. But, we rarely have frost dangers here and the soil stays warm just about year round. Late season okra won't kill anyone.

Anyway, back to the surgery. We stayed in San Diego 2 1/2 days, which was nice because it wasn't 122,000,000 degrees outside there. Unfortunately, I'm one of those people that has a hard time sleeping somewhere unfamiliar. So, I think I got 6 hours sleep total those few days. Plus, lots of running around for surgery stuff and other appointments. It was so very tiring, and then I came home and had to go to work the next day. I didn't even get to rest over the weekend because it was my granny's birthday. No one else had any plans to celebrate with her, so I took her to lunch and we went shopping. I got her a cake and a gift card to a fabric store, since sewing is one of her hobbies. It was still mega hot, too, so we burned ourselves up with all that.

Sunday I was so exhausted, I went to church, did my usual set up before service, and then left. I just couldn't stay... or stay awake. Luckily, I have people that I can rely on to help me, so they did the clean up for me. I hung out with my mom, who I had to move into my room while her air conditioner got fixed. Then, yesterday, Monday, I went to work and then left to San Diego. Mom had her post-op follow-up and my granny had an EEG scheduled for right after. My granny's appointment meant getting out of the doc's office right at 5 p.m. and ain't NO ONE got time for rush hour traffic. I hit the nearest exit and walked into Target for a bit. Then buzzed over to my favorite fast food joint that doesn't exist in my neck of the woods- Chipotle.

Today, and every day the rest of the week, I'm working to make up hours that I'm so far behind on thanks to everything that has taken me out of the office this month. Ordinarily, I'd just let it go, but this is the paycheck that will be funding my adventures at Comic Con next month. So, I need all my hours and every red cent I'll be making. That's why I'm skipping the gym this week. Frankly, it's probably for the better as far as my energy level and lack of sleep status. I think I'd get 10 minutes on the treadmill and just pass out on my feet. Next week, though, I'll be back at it. I actually am finding myself looking forward to being able to hit the gym again.

A big reason is some sort of results are starting to sort of subtly show. I think I complained a blog or two ago that I'm wasn't seeing anything happening with my two-days-a-week gym time. But, at the retreat one of my friends told me I was "looking good!" I was in a pair of those joggers pants with the tapered ankle and baggier thigh and a t-shirt. So, "looking good" in an unflattering outfit was really something! I also ripped a hole in my only pair of pants, so I had to buy some new ones. I grabbed my usual size, in fact it was the same pair of pants I had torn, right down to the color, and they fit "just right" in the dressing room. I also scored a pair of jegging crops in the same brand and size. Two weeks later, I'm finding myself pulling them up all the time. They still fit- I mean, they aren't baggy at all, not even in the hips where they keep falling down. But, they're just loose enough that it looks like I'll have to get a smaller size soon. Maybe too soon since they're brand new pants. Gah! I can't afford a new wardrobe!

I've also done a little bit of dietary changes, too. I have found myself totally and completely obsessed with grilling/BBQing. I know that smoke and char is going to give me cancer (but, really, what doesn't? I give up!) I can't help it. I've been grilling mostly vegetables. Grape tomatoes, colorful bell peppers, sweet onions, green onions, whole corn, butternut squash, yams, mushrooms... whatever I can grill, I've been grilling it! It may be 100 degrees outside when I'm grilling, but it's better than heating up my whole house cooking inside and having it take HOURS to cool back down. This has helped me increase my veggies, cuz for reals, grilled veggies are AMAZING! Totally different flavor dimension! Also, I've been having some swelling issues in my feet/calves lately. No pain, but some pretty bad swelling, so I've had to wear some compression socks and elevate my feet/legs at the end of the day. I started by reducing my sodium intake, which of course the best way to do that is to cook your own meals at home. So, I've cut way way down on the sodium-filled restaurant- and fast-food. This week I have all my lunches planned since I'm going to be at work for longer hours. Today I've got a homemade "instant ramen" in a mason jar. I've got vermicelli rice noodles, shredded carrot, fresh English peas, cremini mushrooms, snow peas, sweet peppers, and the reduced sodium chicken broth concentrate from Trader Joes that you add water to. Oh, and some shredded chicken leftover from the other night's grilling session. I'm excited for lunch already! My tummy doesn't seem to want to tolerate anything more heavy than yogurt for breakfast, so I've got my office fridge stocked up. Someone cut open one of my watermelons the other day, so I have some melon, too. Tomorrow will be a salad in a mason jar. After that a lavash wrap with roasted red pepper hummus. And I'll decide which meal I want to repeat for Friday.

My plan for Saturday is to stay in my jammy jams, don't brush my teeth, and sit on my tired, wide butt for the whole day. I'll be turning off my phone. I'll be binge watching something on Netflix. I will nap off and on all day. Maybe I'll read something for fun. Basically, I need to give my body a rest and I really hope I can do that.

P.S. I wanted to talk about my unfortunate living situation a bit, but really what can I say? I'm 34, I hate living with my family and desire independence. I live with a whole bunch of selfish people that are so self-centered they could really give a bleep about anyone else or care about how their own selfish actions effect those around them. They aren't going to change without something drastic coming into their lives and stirring the pot. 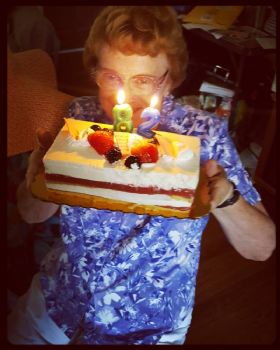