Strong and Lean in 2017 - Adventures on the Road to Palenque

Sorry it has been so long since my last post. I still have a few more days outlined in my journal of Mexican Adventures so continuing on....

Up early this morning as we needed to be ready to go by 6:00am. First stop was to pick up Christie's Mom at the Bonilla Hospital which is where their home is also. Dr Bonilla gave us a bag full of medicines and supplies to take on the trip as the area we are going is quite remote. Next stop was to pick up Carmelita. She is the ex-wife of Christie's Uncle (her Mother's Brother) and he runs the Addiction Rehab Center. They have been divorced about a year but it is obvious that the family did not divorce Carmelita. We are using a Suburban from the Addiction Center for the trip which is large enough for us all; 7 people including Andreas (Christie's 11 year old boy) and our luggage. Ray is driving and he drives quite fast, brakes hard for speed bumps and passes on narrow roads. He tells us he has been driving since he was nine and can drive anywhere... anytime. I think I know where the name Speedy Gonzales came from.

The City on the edge of the jungle area where we are going to is Palenque. It is about a 5 hour drive away from San Cristobal. We stopped after 2 hours to go visit the ruins at Tonina. 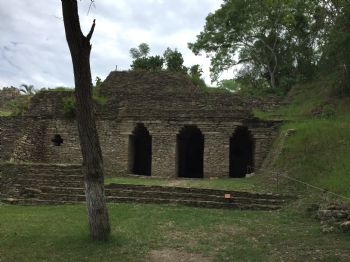 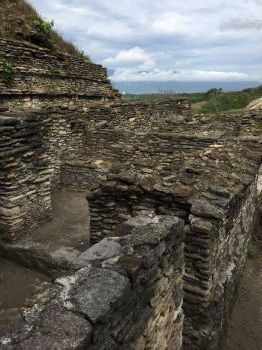 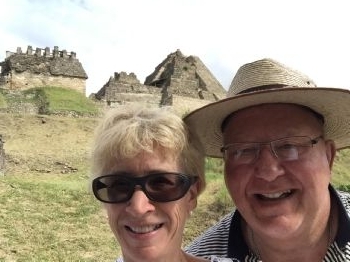 These Mayan Ruins date from 700AD and are amazing. After we parked, we walked down a road to the entrance of the ruins and a very large yard area. A local gentleman was standing waiting for tourists to come (we were the only people at the ruins) and offered to give us the tour. He only speaks Spanish but Christie was able to translate. He told us about the various buildings and asked if we wanted to climb the stone stairs to the top. It was very warm and humid and there were a lot of stairs. I declined as I'm not sure DH would be comfortable with the exertion. The guide suggested an alternate route which is much less strenuous and we accepted. Basically, we go up a trail where we are able to get to the middle level and then from that point we walk around the area going up small steps a floor at a time until we reached the top. It was outstanding and we were able to see the area where the nobles lived. One interesting place was the arena where games were held. There were wide stone stairs where the spectators sat to watch two individuals fight with the winner being given the "honor" of being a human sacrifice. They fought to win as they wanted to be sacrificed!

After we finished our tour, we tipped the guide 200 pesos which is the equivalent of about $10... he was thrilled. DH also gave him one of the replica trading coins and I noticed later he was showing it to one of his buddies. We went back to the car and had a picnic lunch... sort of a tailgate party. Christie had brought sandwich meat, baguettes, condiments, and drinks so everyone could make their own hoagie. It was delicious.

After we left the ruins and continued on and headed to Palenque. About an hour into the trip, the car started developing trouble... sort of coughing and losing power particularly on uphills where you needed to give it gas. I thought it seemed like the gas was bad, but it kept getting harder and harder to get power. At several points, we actually had to get out of the car (on the narrow roads) and push the car until we could crest the hill and get the car going again. This went on several times. Ray called a service department of some sort and was told it sounded like we had a bad fuel pump. 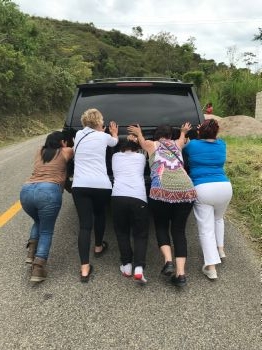 We were able to struggle along until the car just died completely. Fortunately, we had a small wide area nearby and Ray backed the vehicle downhill and parked. At this point, It was about 1:30pm and we were still at least 2 hours from our destination and in a place that had no cell service. This is a very dangerous road with known banditos. I later googled reviews (see Trip Advisor) on the road to Palenque from San Cristobal and shuddered at the problems people have encountered on this road. We were fortunate that shortly a police car came by and they seemed to be helpful. Christie made them sandwiches as some police want bribes to assist. They made connections for us with a tow company and we were told the tow truck should be there to get us by 4:00pm.

Something strange... While the discussions with the Police were going on, a blind man walked by on the road and was bumping into people and parked cars and just calmly went around the obstacles. How odd... here we are broke down and a blind man is walking on the road. This was a pretty surreal situation. To pass time, we just sat around in car and alongside the road and talked. it was quite hot out; but we made the best of the situation.

When the tow truck didn't arrive by 4:00pm; we all started to get a bit more apprehensive. Now I love adventures... but this was getting dangerous. At 4:30, Ray and Carmelita decided to walk back to the nearest town and look for a phone. They thought it would be a 2 or 3 miles walk.. Maybe. I would have offered to go, however since I don't speak Spanish I wouldn't be much help. They headed out. We continued to wait and meanwhile I said several prayers. I am a believer and I know that if God takes care of birds in the fields, he can take care of us. After that, it wasn't too much longer and hallelujah; the tow truck arrived with a police car following. God is Good! 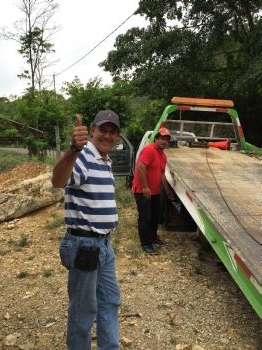 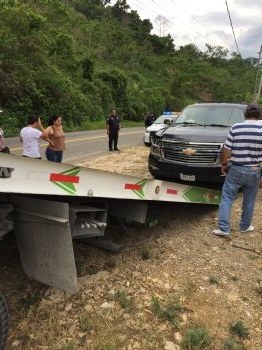 The police went to pick up Ray and Carmelita while the tow driver adjusted his truck to get us loaded. We were very lucky to be in a place wide enough for all this to happen. The police brought Ray and Carmelita back and in a few minutes the tow truck is ready to wench the car up. That is when I find out that we will actually be riding in the car ... on the back of the tow truck.. into Palenque! I understand that this is actually illegal; but the police knew and didn't say a word. With seven people there was no other way and we had to get off the road and to Palenque before dark.

We arrived without further incident in Palenque at 6:30pm... no more problems and no banditos! We dropped the car at the garage with assurances it would be ready tomorrow by Noon. The mechanic said he would work on it all night. We took a taxi to our hotel and the rest of the evening, we relaxed having a nice dinner in the restaurant. Andreas even had enough energy to go enjoy the beautiful pool. I put my head on the pillow that night with thanks. 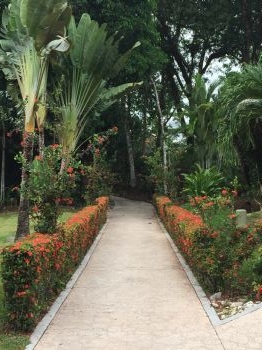 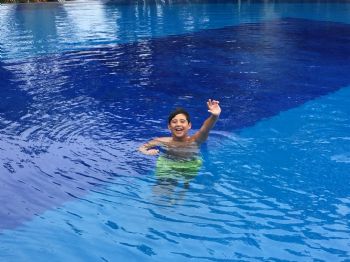