Why Coconut Oil Won’t Kill You, But Listening to the American Heart Association Might! 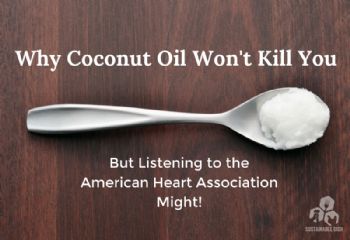 "Most nutrition research is based on epidemiological data that can only show correlations, or connections, and cannot determine causation between two variables. For example, the number of films Nicolas Cage has been in correlates with the number of people who have drowned falling into a pool."

In recent years, there have been 17 meta-analyses and systematic reviews conducted that have not found a clear link between saturated fat intake and heart disease. Of those that reviewed clinical trials on the subject, (instead of just epidemiological studies) not one found any connection between saturated fat intake, heart disease, and mortality. You can see a great summary of several of the studies on this topic here. Oddly enough, the AHA’s “in-depth analysis” only utilized four studies, some from the 1960s, to draw their conclusions. In their paper, they state only these four were “good enough” to be included. One famous study is the Framingham Heart Study.

Regardless of the AHA cherry picking data to support their recommendations, the bottom line is that there’s no strong data connecting saturated fat and cardiovascular disease. Therefore, demonizing coconut oil (or any other type of saturated fat) as the cause of heart disease is simply not supported by available research."