Strong and Lean in 2017 - Adventures at Lagertero Ruins

Today I felt much improved (Thank you Lord!) and was well enough to participate in the planned activities. We packed up around 9:00am and took a drive to another area of the campground I had not seen yet. We drove through areas where the road was covered by fast running water (about a foot deep) from streams which was sort of scary but didn't phase Ray one bit. 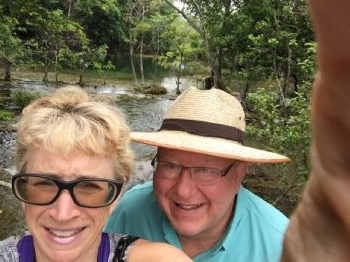 Since I missed seeing the Mayan ruins in the area yesterday they asked if I wanted to go as they weren't far away. I was delighted! We drove on a very crude road through a forest with lots of interesting Banyon trees for a few miles and came to a clearing where we parked and from there you had to walk. 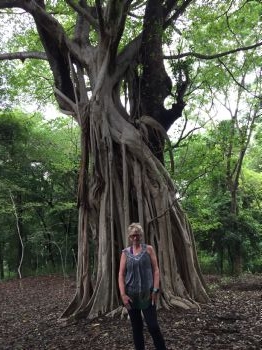 Part of the path was actually wood boards over water. Christie mentioned this was a new addition in the past few years; and prior to that you walked on logs over the stream! 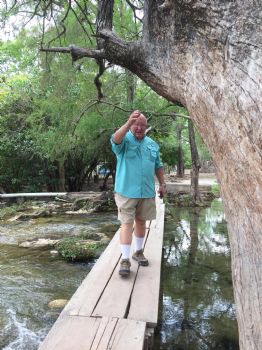 The Lagertero ruins were discovered in the last 20 years and are not well known, even by locals. We walked for about 5 minutes on the plank sidewalk and along the walkway you could see logs across the streams and rocks that was the previous way to get in. Glad I didn't have to walk those logs! When we arrived the area was very park-like with a small building that had a few pictures of some of the artifacts that had been found (and I presume are now in a secure place) and bathrooms. There were a couple of park rangers / maintenance people and that was it. We walked through an area thought to be where people had once lived (only stone foundations remained) and came to one of several pyramids. The pyramids are interesting because they look "melted". 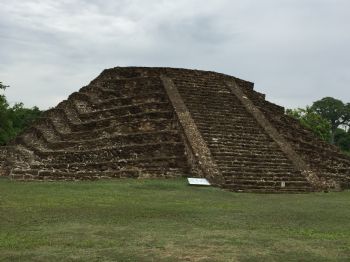 The area behind the ruins also had a very large tree known as a Sacred Tree and it is believed that more ruins will be found and excavated in the area on the other side of the tree.
We walked around and I found it amazing that we were the ONLY people there. These ruins are thought to be from the fourteen-fifteenth century.

After leaving the ruins we decided drive to Guatemala going to a different area than we did the other day. Again, it was fascinating to see all the activity, marketplace and street vendors. 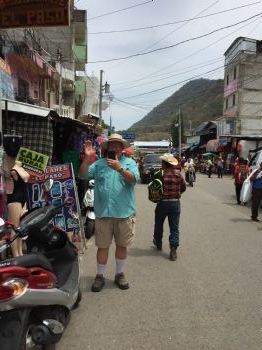 The region is very mountainous and reminded me of the photos I had seen of Machu Pichu where the mountains are very green and steep. One interesting observation was there were several military checkpoints along the highway coming back into Mexico from Guatemala and we were not stopped once. Going into Guatemala we were stopped and the official asked why we were going into the Country (tourist) and only asked to see the car registration... that was it.

At this point, we still hadn't eaten breakfast and were getting hungry. Christie didn't think we should risk eating in Guatemala (I agreed!) so we stopped to eat at the Mall on the way back in Comitan. They had a food court at a Mall with Pizza, Chinese Food, Burger King, Subway, etc. Some of the food places were different than we see in the States, but at first glance you would think you were in any City USA. It was lunchtime by now so we had Subway and Christie and Ray had burgers and fries.

The drive back to San Cristobal de las Casas was uneventful, however throughout the day I was beginning to think I might possibly be getting a bladder infection. Wonderful... We will be going on a 4 day adventure in the jungle in a few days so if it is an infection I need to get antibiotics before we go. After we got home, I told Christie my suspicion and she arranged to take me to her father's hospital (he is a doctor) to get checked. That was a whole new experience. We had toured the hospital a few days ago and it is more like a medical resort. We drove up to the front door and a gentleman came out and removed cones so we could park on the street right in front. Then we were ushered in and seated in a waiting room where a nurse came in and took my blood pressure, temp, heart rate, breathing, etc. Christie works in Administration at the hospital so she is familiar with the readings, but she isn't a nurse or doctor. She said my numbers were all good and they looked like I was a teenager. lol Her father was just finishing up a surgery and came out to greet us in about 10 minutes. He took me to an exam room and asked a few questions (Christie interpreted) and then checked my abdomen. He didn't think I had an infection, but felt I needed probiotics since I had such severe issues the previous day. He also wrote out a prescription to get filled at the pharmacy. Since I was feeling better now, his guess was I had food poisoning. If I do have an infection and feel it is getting worse tomorrow or Sunday he is available to see me anytime. 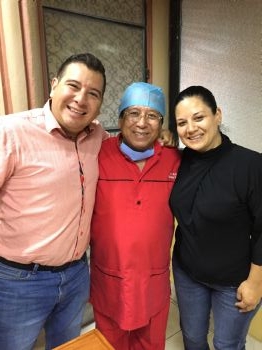 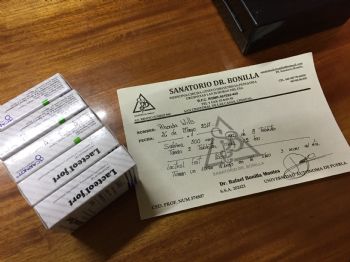 When we got back to the house, we had Chicken Soup for Dinner. While we were gone, Christies Mother came to the house and made homemade Soup! This family is so hospitable and caring. Really another day like no other.