Are You Aware of the Danger of Trans Fats? 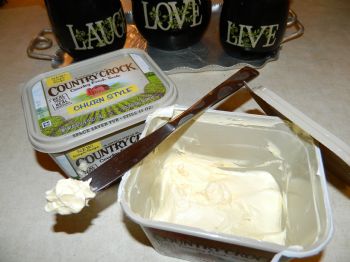 The June 2017 National Geographic contains and excerpt from the book "Pandora's Lab: Seven Stories of Science Gone Wrong" by medical historian Paul A. Offit. Specifically it details how margarine replaced butter in the American diet, thereby introducing TRANS FATS. As a result, by 2001 the Centers for Disease Control reported that 12.6 million Americans had coronary artery disease and 500,000 died from heart attacks and strokes every year. Today, one estimate says that eliminating trans fats would prevent 250,000 heart-related deaths a year in the U.S.

Here are some other highlights from this interesting article:

Oleomargarine was first created by a French chemist at the request of Napoleon III in 1869, who wanted something cheaper than butter to feed his army.

In 1902 Proctor and Gamble acquired the U.S. rights to the patent and converted cottonseed oil from a liquid to a solid, creating "crystallized cottonseed oil" or CRISCO.

By 1957 Americans were eating 8.5 ponds of margarine a year, about the same as butter. William Rothstein wrote in his book, "Public Health and the Risk Factor", "The massive advertising of health claims for margarine transformed a generally disreputable product of inferior quality and flavor into a great commercial success."

By 1976, margarine consumption had increased to 12 pounds per year but the incidence of heart disease in the U.S. continued to rise. It took decades to understand why margarine was actually the "heart-unhealthy" alternative. The reason: the presence of TRANS FATS.

By the 1990's tens of thousand of products were made using partially hydrogenated vegetable oils. Stick Margarine alone could contain 25 percent TRANS FATS.

In 2006 the New England Journal of Medicine declared, "On a per-calorie basis, trans fats appear to increase the risk of coronary heart disease more than any other macronutrient."

Since 2006, the FDA has required all manufacturers of packaged food to list the quantity of trans fats on every nutrition label.

The article concludes: "American tables proudly served margarine as the heart-healthy alternative to butter when it was exactly the opposite."

I immediately checked my Country Crock Spread to make sure it listed "0" Trans Fats which is does. However, there is a loophole in the law which allows manufacturers to claim zero trans fats when there can be up to 0.46 grams per serving.

Also the article never drew a distinction between the old stick margarines of the past with the new spreads in tubs which we still call "margarine" . My Country Crock Spread does not list any "partially hydrogenated oils" in the ingredient list. But watch out for baked goods and microwave popcorn. Read those labels !