Americans who pause Monday on Memorial Day to remember men and women in all branches of the military who died serving their country will fly their flags at half-staff in mournful tribute and appreciation for their sacrifices. But the ritual is not as simple as raising the flag halfway up the pole and locking it in place.

Here are essentials to know about proper flag etiquette on Memorial Day, as well as how to properly show respect as the colors are presented in ceremonies being held around the state this weekend.

When you attend a memorial service, you need to know whether to salute Old Glory. During ceremonies when the flag is hoisted or raised, spectators who aren’t in military uniform should face the flag, stand at attention and place their right hands over their hearts. Others should:

- If you’re in uniform, give a proper military salute;
- A man who is not in uniform, but is wearing a hat should take it off with his right hand and hold it at his left shoulder with his palm resting on his heart;
- If you’re not a U.S. citizen, stand at attention.
When the flag advances in a moving column, it is appropriate to salute it as it passes.

If you fly the red-white-and-blue at home, make sure flag is in pristine condition and isn’t tattered and torn, and that its red and white bars and the union (the blue field of stars) are bright and vibrant. If the flag is no longer suitable for display, dispose of it properly, preferably in a ceremonial burning. American Legion posts and other veteran groups often have flag-disposal ceremonies. 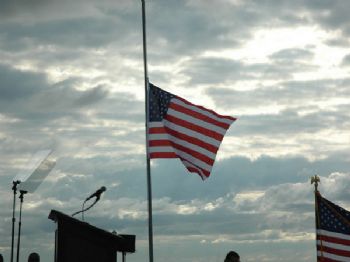