This was a HUGE week for me -- 2 big milestones -- 25 lb loss and I ran a whole 5K race! Sure I was slower than a sloth in peanut butter, to steal a T-shirt phrase, but I finished the whole thing without stopping to walk once. When I turned the corner for the final stretch I was almost overwhelmed with tears. I have always been the chubby girl, occasionally getting somewhat fit, but never really fit, and I have never been a runner. I am now!

I posted the photo below on the community feed, but I wanted to post it here to point out something. You see that guy running next to me at the finish there? I never caught his name, but we were pacing each other the whole way. He was doing intervals and I was running a steady pace, so we kept passing each other -- he'd go faster than me on his run, then slow to walk and I would pass him, and then he'd run again, etc. My guess is that he was somewhere in his 70s. 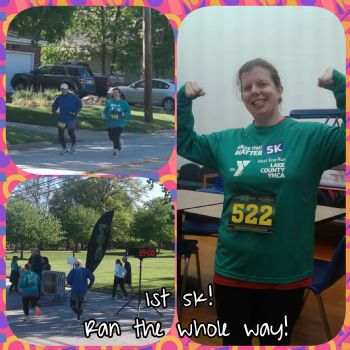 Along the way we started chatting a bit, just short words of encouragement between breaths, and at the end he turned to me and said, "Let's cross the finish line together!" We got down the road and just before time, he said "Go ahead" and I sprinted the last 15 feet across the line. I thanked him afterwards for the encouragement, and he said "I just remember when I started running! Congratulations!"

Since I am a member at the YMCA, which this race was for, I also saw a lot of other people volunteering along the route that I knew. One woman, Sue, who is one of the staff there, has been cheering me on and chatting with me this whole journey -- from couch potato me in January until finishing the 5K. She was handing out water at the 2 mile mark and cheered when I passed. Some other people I have seen around -- other swim moms, or guys from the weight room -- were also along the route, offering many words of encouragement as I trudged along.

I feel like I have such a community there at the Y -- not just people at the gym, but people who would notice if I stopped going and try to find out why. Here at Spark, I also love the community -- so many words of encouragement along the way!

It's funny, when I was a smoker, over 13 years ago now, I used to love meeting random people when I stepped out for a cigarette. I would strike up conversations with complete strangers just because we had the shared vice of smoking. When I quit, I missed some of my smoking pals, including many who I never saw except when taking a smoke break. Now, I have found a MUCH healthier way to connect with people! When I mention I am running a 5K, or training for a triathlon, I find that there are many other people on this fitness path. I get to chat about things like which bike to buy, or what best to eat before a race. When I am at the Y, I chat with people about their families or work as we stop for water at the fountain or put makeup on after our showers.

There are so many of us out there trying our best to improve -- it's so nice to know that there are so many others out there who are super psyched to cheer us on!
Share This Post With Others
Report Inappropriate Blog
Member Comments About This Blog Post