Yesterday, the DH and I drove to Portland after lunch so we could pick up our event packet before the 3:00pm cut-off time. I always wonder why they choose such an early cut off time as it is a problem for people driving from out of town. We didn't have any traffic issues so made it with a half hour to spare. The DH was signed up for the 5k and I'm doing the Half. The shirts and medals are all the same, just different colored bibs. The pick-up was at a running store and as we walked in the door they handed us a discount coupon.... so of course I had to look. I found a really cute periwinkle blue t-shirt style running top and a pair of matching grey shorts. The store tried to get me to sign up for their $45 annual membership program so I would get 25% off every purchase... but no thanks. Just give me the $10 off on this one-time purchase. We picked up our race numbers and complimentary event shirts. I have stacks of event t-shirts and typically they just land in a pile never to be used, however I actually did wear this t-shirt to bed last night. It is super soft. I don't ever wear a new shirt for an event because who knows where it might chafe.. and I'm always amazed by the people I see on the course wearing the event shirt. After we finished at the store, we headed to our hotel. I got us a room on "Hotwire" that was 100% user approved so I knew it would be okay. We ended up getting the Marriott Residence Inn and although our room was a studio it was large and had a kitchen, nice living area with a couch, desk, etc. We didn't feel crowded at all and I always like having a fridge for drinks and such. The room also came with a complimentary hot breakfast... but we didn't get a chance to have it as we had to leave in the morning before they served. Oh well, that is typical so I brought us cereal.

We had dinner at the Olive Garden.. one of my favorite restaurants. It is quick and easy. The DH and I split the Chicken Parmesan and it was delicious. I wish I could make mine as good as theirs. It is always tender but crispy on the outside... and of course smothered in mozzarella and marinara, A half serving is perfect. We also split the salad and I didn't have any of the bread sticks. The DH ordered a Chocolate Lasagna desert which was basically layered cake, custard, chocolate and caramel. Didn't have any of that either. I've avoided sugary desserts now for 3 months and that has worked well for me.

We hit the pillow early and I had a pretty restless night. Just couldn't get comfortable with the pillow and was up 3 times ... finally gave up at 4:30 and made a pot of coffee. The alarm was set for 5:30 but I figured that would be about the time I would get back to sleep. Hopefully, I'll be able to get a good night's sleep tonight.

We packed up our stuff and left for the venue at 6:30am. It was cool out (40 degrees) but sunny and beautiful. My weather app said it would be in the low 50's for the run and that is perfect for me. I wore a light jacket and just tie it around my waist if I get too warm. Parking for the event was problematic. We knew this going in and scoped out a spot yesterday on the street that was about a mile away. Street Parking is free on Sundays until 1pm and even if we used a paid lot we would have had a walk... so we took the free option. We walked over the beautiful Tillicum Bridge which is just a few years old. It was built over the Willamette River for pedestrian or mass transit use only... no cars. I hadn't walked over it yet so was looking forward to that experience and on such a beautiful sunny day it was perfect. 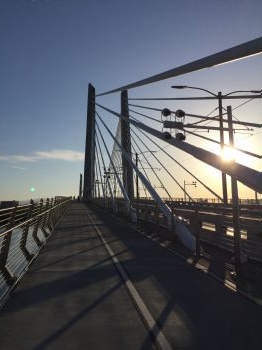 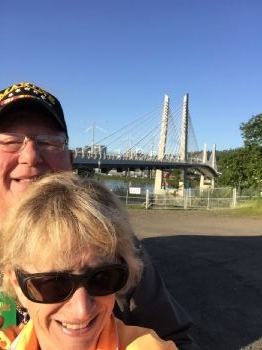 We arrived at the venue pretty early, however within about 30 minutes there were people everywhere. Along with the 5k and Half, there was a 10k and kids run so I'm guessing at least a couple thousand people. The course was through downtown Portland, across bridged, along the waterfront, through industrial areas and there were more hills than I expected. It was all good though and I was pleased with my finish time. I'm a slow runner and by the time I finished they had run out of medals. They did take my name and said they would be in touch to get one to me later. We will see if they follow through with that. In the meantime, the DH got one and it is the same so I'll add his to my display... he won't even notice lol. One of the perks of being slow however is vendors are closing up shop. We scored two cases of chocolate milk and a full loaf of Franz Whole Grain Hemp bread. I know it sounds weird but it is delicious and quite expensive. I'm working on putting together fun event bags for an eight lady Portland to Coast relay I'm doing in August so I'll put some chocolate milk in the bags. There was also a Kind Bar booth and the Kind Bar people told me to call later in the week and they would give me Logo shopping bags and a bar for each of the ladies. I think it will make for a fun surprise and I'm hoping to score more things to put in the bags before August. My Sister is giving me sparkly tee shirts for everyone from her restaurant and that will be a hit I'm sure.

When I got home I checked the race results and saw I came in 2nd in my division. Woot! Dang, should have checked results while I was at the event as I would have gotten a ribbon! 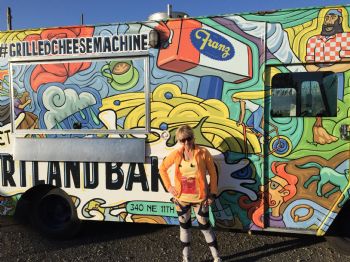