Should We All Just Give Up Now?

This morning I read an article posted by a fellow Sparker on one of my team message boards. The article was interesting, and also very, very scary. Reading it would almost give anyone with serious weight issues reason to think they should just throw in the towel now and save themselves the headaches, struggle and heartaches. This is the article:

Basically, in a nutshell, it is a study of one of the seasons of The Biggest Losers following several years after they ended the show, and how badly damaged their metabolisms were. It also talked about how the body fights weight loss, even when the person losing is so severely overweight that their health is in jeopardy from it.

Now, yes, they studied Biggest Loser season winners, and I'm pretty sure that anyone here will understand that the regimine on that show and other shows like it is not only impossible in reality for average people, but dangerous for the people who do it.

What got really scary is the scientists in the study began to point those figures at EVERYBODY, intimating that real long-term weight loss just isn't going to be possible, or likely, because of the dynamics of obesity and its effects on the body.

That's where I had to start bristling.

I posted a lengthy response on the board to the article, and I wanted to share it here, because, I believe, it is very important to NOT GIVE UP. I think there are some problems with the study being presented in that article. It is possible to lose weight and keep it off in a healthy and reasonable way. It won't be nearly as fast as the losses on those shows, and it shouldn't be, but it will be longer-lasting and healthier.

That was a very good article... although it is also scary and a bit sad if it is true.

However, I think one of the things that the scientists failed to acknowledge was the fact that many times people in general and even specifically those people, 'end the diet' instead of maintaining a lifestyle that is reasonable the entire journey (just one of the huge downsides to those types of shows that set up unreasonable expectations).

They also do not identify food addiction which, if most severely obese people (like myself) were honest with themsevles about, they would have to admit that that is a huge issue, not just the food, but the addiction. It seems and feels unfair at times, but the reality is, there are going to be foods that food addicts will NEVER be able to safely eat again. Alcoholics probably feel, at times, that it's unfair that their friends can drink a few drinks and quit, but they will never be able to safely, too, but that's the reality.

The people on those shows are not the 'average' person with 10, 20, even 50 pounds to lose, they are people with severe physical, mental and emotional food issues. Those shows simply do not really and truly address that. (yeah, yeah, they pay lip service to what's behind the eating, but they don't really provide real support for that, especially in acknowledging it to those watching the shows). They rarely if ever that I've seen, deal with the addiction aspect. That, to be fair, is a pretty 'newish' concept that is only getting scientific research now, so I can't totally blame them for that, but it IS a reality.

I have known people who have kept off large amounts of weight for years... but it is an ongoing thing that they always pay attention to.

I will offer up my own experience here. When I was 20 (I was fat and then obese from infancy all through my teens), starting at 250 (okay, not as horrid as it could have been, but still severely overweight), I got down to 119 (a little too thin, but still healthy enough and strong)...

I worked out religiously and LOVED it.

I loved the healthy foods, and exercising (wanted to emphasis that).

I got married and continued to enjoy being thin and healthy for the first time in my life.

I got pregnant... I gave myself a license to eat (after all, eating for two, etc, you know).... I did 'almost' regain control after that, but then got pregnant right away again...

bye bye, that's all she wrote.

I have not been back to that weight since, nor anywhere close. I have tried a few times to lose over the years, but they weren't successful in the long run. Not because I was 'hungry' per say, and not because my metabolism was worse for the wear. In fact, I kind of let that idea of a busted up metabolism be an excuse for years... getting up to 414 pounds and just feeling like that was the way it was going to be. But the reality was I simply did not understand the food addiction. I sort of 'stumbled' on the right food choices at 20, but for some reason didn't go back to that each other time, and even back then, didn't realize the addiction aspect of the 'wrong' foods.

I'm having far more success now than I have in the past 34 years... So obviously it isn't a metabolism issue. In fact, I also allowed myself to believe that being over 50, and also menopausal (for several years now), that it would be HARDER to lose even more so now. Obviously again, not true. I'm still in danger all the time, and I know it... I am hoping that I have the ammunition now to realize what was happening, and the strength to not give in to the desire to eat things that will trigger the addiction again. (I certainly will not have pregnancy to use this time around, lmao).


PS- I wanted to go back and hit on what I was trying to say earlier in this, that the "diets" on those severe weight loss shows (all of them) are NOT REASONABLE... and in no way something that anyone could maintain for years in a real life setting. I've always felt that. I do love watching most of the shows, but I know that it is TOTALLY unreasonable to expect to lose 5, 10 or many times more pounds a week that those shows suggest (and isn't really happening all the time either), and unfortunately, that's the message that the majority of viewers are getting. They SHOULD be able to do that.

Even if they could, they won't be able to maintain that, and yes, that can do serious damage to the body, not just metabolism wise, but muscle and organ wise as well.


Back to the article... if it really is true, we should all just give up now. Thankfully, scientists can get it wrong. Even their 'imperical' evidence, tends to often be skewed by being so focused and not seeing the other issues at play. So... DON'T GIVE UP

It won't be easy and there IS NO MAGIC PILL.

It takes work but it's possible, and it's WORTH IT. 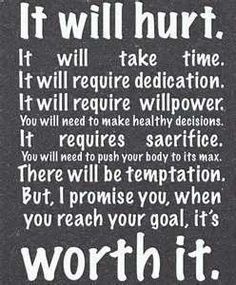