ARLINGTON, VA — Raccoons are having a rough go of it in the region lately. First a raccoon got stuck in a Reston bird feeder, then another one was rescued from a drain at Wakefield High School, and now on Friday a reporter driving through Rosslyn spotted one hitchhiking on a garbage truck.

Politico reporter Helena B. Evich posted the photo below of the raccoon and tweeted that she did, in fact, alert the driver.

The frightened looking masked bandit was apparently just looking for some trash when the driver took off, not realizing the new passenger. 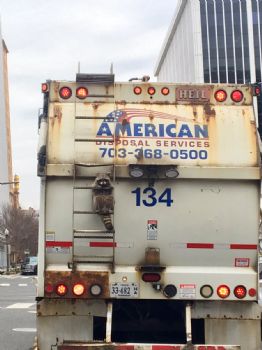