Since I'm already halfway-ish through February, and I need to "revamp" my goals for the remainder of the month, I thought I'd just check-in really quick.

To recap my Feb goals:
Make it the gym twice a week
Cook at home most nights for dinner
Allergy shot each week
Track!!!

Making it to the gym twice a week was going well until last week. I had a weird incident happen on Thursday, my normal gym day, that required I be out of town. And now I've got one of the worst colds I've had in a looooooong time, so I'm not sure I'll be in any shape by Tuesday to get back to it, but hopefully I will be by Thursday. 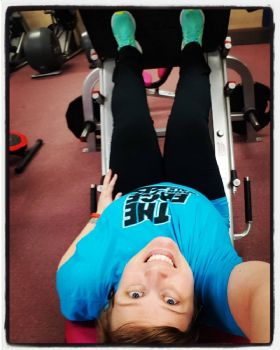 Every day is leg day.

The next goal of home cooking was also going fairly well, other than the fact that again, I'm so sick! I am too dizzy, exhausted, and unable to stop coughing to cook at the moment. With the coughing alone, no one is going to want to eat anything I make. Even I wouldn't and it's my own germs! 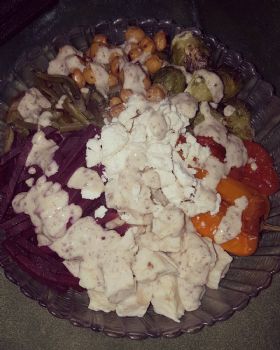 Memories of recent germ-free meals. So many vegetables!

My allergy shots... I did not go last week. I really am bad lately about making the effort and I really need to work on that. I don't know why I don't go. Truthfully, I suspect it's laziness. The immunologist I see only does allergy shots at the beginning of the week on Mondays, Tuesdays, and Wednesdays. There have been weeks were it's been 6 p.m. on a Wednesday when suddenly I remember what day it is and realize it's too late. But, for the most part, it's like, "Eh." I usually like to go right after work because it's on my way home, but I get off of work at the same time the immunologist office closes for lunch. I don't want to go before work because there have been occasions where I've waited up to 20 minutes just for my shot (which takes literally all of 3 seconds). So, this is something I need to think about and work on.

And then there's tracking. UGH!!! I hate tracking and I'm not doing a good job at it at all. I'm not tracking my food, which is the most important thing to to track, not even in my fun little paper journal. I even took it with me on my trip. I take it with me in a bag everywhere I go just so I don't forget it. And I still don't do it. Obviously, this is something that I really REALLY need to work on. And the easiest thing to track, my exercise, I'm not doing outside of my Fitbit that's connected to my Spark account. When I've hit the gym, I've done both cardio and some light strength training, as well as stretching. I should be writing all that down! Having a visual is helpful, no only to see where I'm lacking, but also for encouragement in the areas I'm succeeding.

So, due to horrific sinus infections and severe bronchitis, I'm going to have to modify my goals for the remainder of the month until the antibiotics kill all the bugs floating around my poor body. Seriously, it feels like someone took my immune system and stuck it in a food processor. My cough has my throat raw, my ribs sore, and my head pounding. My sinuses are a constant stream of goo and my nose is as red as a summer ripe cherry tomato and as sore as a grease burn. I've been through 1.5 Kleenex boxes since Friday. As a result of being so miserable, I'm having a hard time sleeping and moving around. I'm constantly tired. I can't take my asthma meds because as soon as I've inhaled them, I cough them right back out. It's brutal. I'm on prednisone again and azythromycin so hopefully this demon bug will be eradicated shortly and I can get back to real life.

So, new goals for the last part of February:

As soon as I am able, get back to the gym routine. DO NOT let it derail me completely.

Get cooking again as soon as the spread of germs and lung butter is no longer a threat.

Get my allergy shot as soon as I am well (they won't give me one when I'm sick anyway; too taxing on the body)

Figure out a good "schedule" for getting my allergy shots weekly, plus a backup plan in case the office is closed due to a holiday or some such incident.

Get myself tracking again for the love of all things! Start with week days. Just freaking do it.

And, just for a fresh beginning, I made some updates to my Spark Page. I changed all the text and changed the colors. I even changed the shamrock picture at the top to a different one. I updated the photos on the main page. I'm glad I did it. I don't think I've updated it in several years. Now that the business is out of the way, I'll tell the rest of my tales.

I started to feel a bit sluggish and my mom said I was looking a little pale on Wednesday (I returned from my trip on Sunday night). I thought there was a good chance I was coming down with something, as my granny said she noticed I wasn't looking too good on Tuesday at the gym. I figure two people who are close to me might be on to something! I decided to call out from work when I woke up Thursday feeling much worse. I had just fallen back asleep when I was jolted awake by my dad. He was on the phone and telling me that we had to get up and get going. I heard him repeat twice to the person on the phone “Today? TODAY? At 12:15 p.m.? Today?” Then, he went to my mom and did the same thing, waking her up and saying “We gotta go!!!”

See, my dad is just slightly dumber than I am. I took myself out with a toothbrush two years ago and slit my thumb open. I needed 3 stitches. Toothbrush. Felt pretty stupid. So, about 3 weeks ago, my dad had a "brilliant" idea to try to punch an extra hole in his belt using a wussy pocket knife. It did not go as he planned. He sliced across the top of his index finger on his left hand. Lots of arterial blood splatter later, it was discovered that he sliced a tendon. It has taken this long to finally get someone to tell him it was either going to heal fine or he needed surgery on it to repair it. It was pretty ridiculous. Daily phone calls, no one knew what the other was doing, etc. Finally, he saw a hand specialist on Wednesday afternoon, who told him to call his office in San Diego to set up an appointment for next week for a quick surgery. Surprisingly, my dad actually complied (he's not very good at that) and called them just after 9:00 a.m. That's when they told him he was scheduled for a surgery THAT DAY at 12:15 p.m. IN SAN DIEGO. We live 2 hours away from there. So, that meant we had about 40 minutes to get up, get dressed, gas up the car, and hit the road. I mean… were they even going to call him and let him know? Would he have missed his surgery and have gotten a call to reschedule even though we hadn't known about the first appointment? Yeesh! So, I got up and got dressed. We all piled into the car and got some gas. I was feeling pretty crappy, so I stopped to get some cough drops and Mucinex. I got us there with 15 minutes to spare! By the way, in case you're wondering, I am the person who drives in San Diego in my family. It gives my mom anxiety and my dad was having surgery, so he wouldn't have been allowed to drive for 24 hours after anyway. My brother was already at work and my SIL doesn't drive in SD, either.

Truthfully, though, I think even if I had gotten to stay home and rest, I'd still be in this bad of shape. There's no way it would have helped.

I did have a fun trip at the beginning of February. It was a work trip that I hemmed and hawed about having to go to. It was NOT required that I go, but my boss was hoping I would. His wife was too, so she'd have someone to hang out with. Plus it snowed in Big Bear Lake, which is where we were going. If you read my last blog, you'd have found out that I have only been in the snow once in my life. And that was just this January. 34 years of life and I'd only experienced man-made ski slope snow, but not “fell from the sky” legit stuff. My granny said I needed to go and have some fun. I did. Even though it was a winter camp for some 150 teens and tweens, I didn't have anything to do with that part. I just paid the proper people their money and kept track of the paperwork and waivers. We attended the chapel services as scheduled, but for the most part, my friend and I were able to do our own thing. We took her kids sledding and played in the snow. I even went down a hill in the plastic disk we bought. There is no photographic proof, however. Thank goodness! We went into Big Bear village and wandered around. It was way awesome! We stayed in a cool cabin at the back of the property. They took the bedroom and I slept on the [horrifically uncomfortable] futon in the living room. Overall, it was great. I hope I get to experience something like that again! 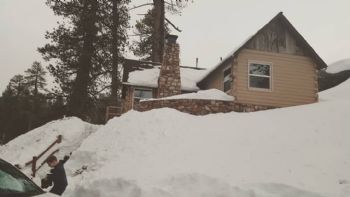 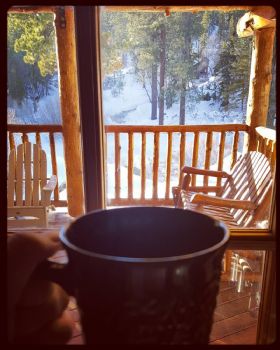 Deck of the cabin. It was 23 degrees out that morning, so I decided to stay inside and drink my coffee. 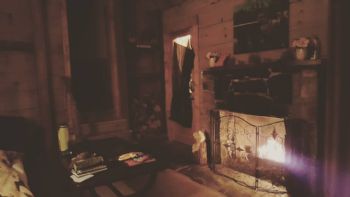 However, I think this awful flu might have something to do with that trip. The cold, thin air really did a number on my lungs while I was up there. I noticed my asthma symptoms started to get a little worse. It's not like I live in 23 (and below) degree weather. I don't think it's gotten that cold here in a long time. So, with my asthma flared up, I know my body struggled to keep itself working optimally. I'm sure while my immunity was low, something crept in and decided it was going to just take me down! 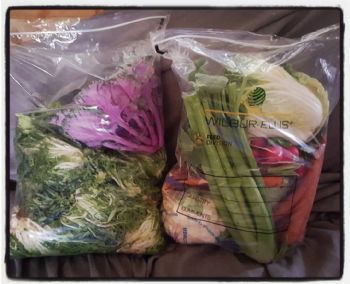 Even though I stayed home sick, my granny and mom made sure I got my vegetables from the yearly Carrot Festival!

I'm working on it. I've got some things to focus on for February once I'm feeling better and I'm looking forward to hitting the gym again as soon as I can!
Share This Post With Others
Report Inappropriate Blog
Member Comments About This Blog Post