After gaining around 9 pounds between November and the end of December, a friend posted on Facebook that she was trying the Whole30 diet. I was interested, so checked the book out of my library. The idea was that you eat healthy, whole foods and eliminate trigger foods, as well as those that might be inflammatory (like dairy and beans which some people have trouble processing). In addition, you can't use artificial sweeteners or sugar, so that first sip of coffee with coconut milk was a little weird, but I'm used to it now and am enjoying coffee with unsweetened coconut milk and a dash of cinnamon.

I've been interested in research that says that the quality of the food you eat possibly count more than calories (yes, I've read about the Twinkie guy!). But, for me, I feel like my slow metabolism defies the level of exercise and the dieting I was doing. I lost around 27 pounds last year, then gained back 9 while exercising and only relaxing my diet slightly.

So, my husband agreed to join me, and it was great, because we were able to eat the same foods!

Here are our results:

My husband: No weight stats shared with me, but 14 pounds lost - that's almost a pound every other day! He has a lot more to lose, but he is feeling really good about this!

Here's my weight loss chart that I maintain in Excel - I'm hoping to complete this mission in 2017: 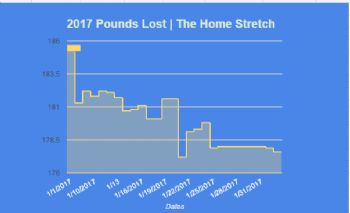 Pros:
- Healthy meats, seafood & eggs, which are organic as much as possible
- Healthy veggies; we fill up on tons of veggies at every meal. They serve as our carbs.
- New recipes. I found lots of good recipes on pinterest. Last night we had stuffed acorn squash with delicious sauteed apples, spinach, sausage and herbs.
- I have tons of energy.
- Coconut milk tastes fine in coffee & I've learned to go without artificial sweeteners (or any sweeteners)
- Without other sweets, I'm finding apples incredibly sweet

Cons
- Food requires prep. Unless you're eating salad, you need to cook
- I had to precook husband's breakfast & lunch on Sundays, so he had food to bring to work. It took more time than him buying lunch at work.
- My husband doesn't like that he can't have diet soda or coffee creamer, but without giving them up he still had great results
- The cost adds up for some of the food, but I found that we're eating less meat since it's mixed with so many veggies. The veggies can be pricey, but luckily we live near an indoor farmer's market, so I've been able to find some good deals. Also, Costco has good prices.

We're doing another round in February. I'll let you all know how it goes!