I have been pondering for several months the idea of doing the Flying Pig Half Marathon this year (no need to do the full, that is crossed off the bucket list). Both because I really enjoyed it in 2012, I need fitness goals to keep me motivated, AND (mostly) the 20th anniversary of my mother's death is this May, and it just seemed appropriate to walk in her memory again (coming full circle from doing the Disney Half with Train to End Stroke in her memory with my sister in 2004). I had also thought to set up a family reunion around that time (because I miss my mom's family, I don't think I've seen most of them since her funeral, and her sister died around the same time - we are fairly convinced my mom didn't want to live without her, she only survived Aunt Dodo by a few weeks). I got push back, though, and nearly bailed on the entire idea because I got my feelings hurt...but dammit, I am allowed to honor my mother's memory in whatever way works for ME, regardless of how anybody else feels, so I've decided to at least do the Pig. I will do it alone if I have to, though anyone who wants to join in is entirely welcome.

Of course, when I went looking for the info on the walking group at Bob Roncker's Monday night I realized the program started the very next day - eek! So I signed up really quick, not thinking about how I was going to rubics cube the schedule to make that happen. As it happened, I had training at work from 8am to noon, and had flipped the schedule SOME, but not sufficiently to allow for getting to Hyde Park by 6:30 pm without a nap. And since the training went a little long, I didn't get into bed until 2pm, which meant when the alarm went off 3 hours later I was in NO shape to do more than take a couple of Excedrin and go back to bed. I felt TERRIBLE about missing the very first group session, and nearly decided to forget the whole thing. Then I decided I would call Bob Roncker's in the morning and see how to best proceed. Eventually it occurred to me to check my e-mail, because I should have gotten something from a coach or a newsletter or something.

Lo and behold, the universe was watching out for me. I DID have an e-mail from a coach, who advised me that there is no longer a separate walking group with the Bob Roncker's training program, and he expressed concerns about my ability to keep up. I AM SO GLAD HE WAS HONEST! Because, as I told him in my response, I already KNOW that training with runners is a BAD IDEA for me - the first day of training in 2012 was not a good experience, and switching to the walking group was the best decision my daughter and I could have made. I totally know better than to try THAT again, especially since I am starting in a far less fit place than I was when I started training in 2012. SO, he is going to get back to me with a referral to a program that DOES have a separate walking group, and I will go from there.

In the meantime, I got THIS flyer from work today... 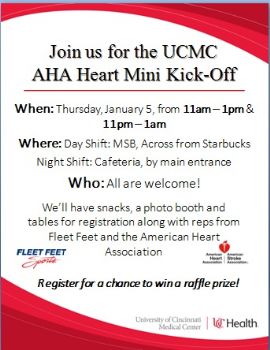