I haven't blogged in over a year! It's been a difficult year for me. I haven't been Sparking much at all, but I'm still here. I've had some health problems. Still, that's just an excuse, isn't it? I've been at SparkPeople for 4 1/2 years and lost 10 pounds. At one point it was 40 pounds. I need to just keep moving forward.

My Dad passed away in the beginning of October. He had been ill for awhile. He was 90 years old and although the PET scans showed he was cancer free in September, he just couldn't fight aging.

He was a sweet, shy man who loved his family and we miss him. Whenever I think of him, I see this picture of him walking with two of my sister's grandchildren to the park. It was taken about 2 1/2 years ago when he was still feeling okay. 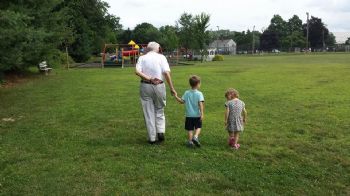