Did the Rosaryville 50K this past Saturday. Entirely on trails in a beautiful state park in lovely Upper Marlboro, Maryland. The temp started out at a brisk 34F but gradually warmed up to about 50F by the end. 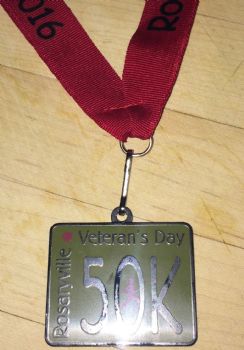 My training strategy? I had none. A friend had only convinced me to sign up for this race 4 days earlier! The longest I had run in months was 13M the weekend before and that was on roads. My longest trail run this summer? Just 8M. Oh well. So I didn't expect to finish the race - my friend and I were just going to do 2/3 of it and then drop.

The day before the race, she announced she was injured and wouldn't be running. Oops. So I was on my own.

My strategy for 21 miles was to conservatively run the flats and downhills at a very easy pace (11:30ish) with plenty of grazing time at the aid stations. Aid stations were pretty good and allowed me to easily eat about 100 calories a mile which included such delights as hot noodle soup and pierogis. Mmm. Rounded out with more traditional aid station fare: fig newtons, potatoes, bananas, etc.

After 21 miles, I felt fine and decided to go for the remaining 10 at a slightly faster pace and running some of the uphills. But the lower half of my body was hurting. It's mind over matter for the last couple of miles at these distances! Basically came down to "putting one foot in front of another til they hang a medal round your neck" as one of my friends likes to say.

I would recommend this race for anyone interesting in trying an ultra. Nice course and quite reasonably priced. I registered just 4 days before the race and it was still just $30 including medal, a hat, and lots of good food and fine volunteers throughout.